Latina Lista: News from the Latinx perspective > Life Issues > October: Over 50 observances and special days mark a busy month to remember and be pro-active

October: Over 50 observances and special days mark a busy month to remember and be pro-active

LatinaLista — October is more than just a month recognized for hosting Halloween. It’s a month filled with so many different and important observances that the White House formally proclaims attention to them. 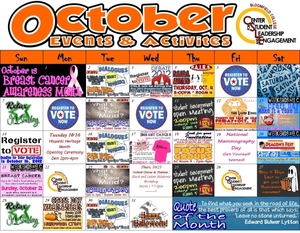 Other notable observances for the month:

Columbus Day (Most of United States) – Second Monday of October

Deportation to Shattered DREAMs: "Something is wrong with the U.S. immigration system"
Comment
Big Brothers Big Sisters reaches out in a 'Big' way to recruit Latino role models