LatinaLista — News headlines tell us that the economy is recovering slowly but surely. For many in the country, their reality isn’t catching up with these headlines — unless they are Latino, Asian or immigrants. 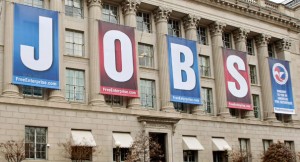 According to a new Pew Hispanic report, The Demographics of the Jobs Recovery, Latino, Asian and immigrant workers are either at the same level of employment before the “Great Recession of 2007” hit or have exceeded it.

Unfortunately, the report points out that this turn in fortune doesn’t apply to everyone — white and black workers’ employment levels remain about 5% below the levels at the start of the recession and native-born workers, compared to immigrant workers’, employment level is still 4% less than its pre-recession level.

Why is it? Are Latinos, Asians and immigrants doing the jobs whites and blacks won’t do?

In this economy, not likely and the reason has less to do with unwillingness to work than it does with basic reality.

The slower rate of jobs growth for whites and blacks reflects the relatively slow growth in their populations. Thus, the share of each group’s population that is employed, the employment rate, has barely risen since the end of the recession, according to new Pew Research Center analysis of government data.

The story is the same when one looks at the jobs recovery for immigrants and native-born workers. Immigrants, the vast majority of whom are Hispanic or Asian, are experiencing a faster rate of growth in employment than are native-born workers. This difference is also roughly in line with the difference in the growth in their working-age populations during the recovery.

It makes sense. The US Census reports today that the Asian population grew faster than any other race group over the last decade. When combined with the news that the leading source of job growth for Latinos was in the hospitality sector — eating, drinking and lodging services — and construction, it clarifies the job picture.

Since many of these jobs don’t have benefits, are minimum wage and are labor intensive, they aren’t as attractive as other jobs like in retail, manufacturing or professional business services that actually saw job gains for both Latinos and non-Latinos in these sectors.

While this news is encouraging overall, the same can’t be said for women. According to the analysis, women are the real losers in the current recession.

Among the groups examined in this report, women represent the only group for whom employment growth has lagged behind population growth in the recovery. Job cutbacks by federal, state and local governments is one reason women have lagged behind men in recent years, but a previous analysis by the Center found that much about this phenomenon remains unclear.

In 2007, 146 million Americans were employed. By the end of 2009, only 138 million. Now, the employment rate is slowly rising — the fourth quarter of 2011 there was a gain of 2.3 percent — but it’s clear that there is still a long road to a recovery — a recovery that is meaningless unless it ensures everyone doesn’t just have a job but has a job with health benefits and a livable wage.