LatinaLista — Author/Illustrator Keri Smith isn’t anti technology — completely. She just feels that today’s oversupply of apps and web sites can suck the creativity out of a person’s mind. So, she’s been on a steady mission of “creating tools that activate people (instead of turning them in to passive users).” 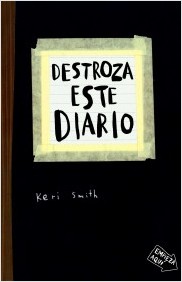 One of her first books to get people to tap into their creativity was with the 2007 title Wreck this Journal. She found that people who promised themselves to start journaling or writing would never start because they were afraid of messing up. With her book, Smith dared people to mess the book up by featuring page after page of crazy or “destructive” prompts to get them to put pen, pencil, marker or,yes, tongues, to paper. All of it in an effort to get people to break through their fears and start the creative process.

Whether it was purposely poking holes into the page or adding pictures, painting pages with coffee or coloring outside the lines, Smith took away the fear of a blank page that stopped many writers-to-be in their tracks.

In the writing world, this mental obstacle that keeps many from starting a project is called ‘writer’s block.’ It’s a universal affliction that writers everywhere face. Until now, only writers who read English could fully engage in Smith’s creative prompts to overcome this mental roadblock. Now, Spanish-speaking writers can do the same.

This week a Spanish version of Wreck this Journal — Destroza este Diario — was released. The publishers, Perigree, an imprint of Penguin books, are not only marketing the book to Spanish-speaking writers but to students learning Spanish.

With the simple commands/prompts, the book provides a fun exercise for students taking Spanish to further their comprehension, and for writers, well, there’s no more excuses to not start on unleashing the creativity that dwells inside todos (everyone).

featured, journaling, spanish, writing
Previous Post In Absence of Formal System, Thousands Earn a Living Recycling Trash in Argentina
Next PostVideo: Young Americans rise above the political rhetoric to voice their own views on immigration

In Absence of Formal System, Thousands Earn a Living Recycling Trash in Argentina
Comment
Video: Young Americans rise above the political rhetoric to voice their own views on immigration