Latina Lista: News from the Latinx perspective > Life Issues > TEDxWomen 2012 launches with global livestream event to US embassies and territories

LatinaLista — TEDx conferences are known for presenting groundbreaking speakers proposing innovative ideas who are of all ages, genders and ethnicities. Attendance at such conferences are often sold out – a true testament to the value attendees place on these unique gatherings where ‘out-of-the-box’ thinkers are allowed 20 minutes to present their cases.

Most TEDx conferences are built around a common theme and this year’s TEDxWomen’s conference is no exception. Launching tonight at 6 p.m. EST in Washington DC from the United States Institute for Peace, TEDxWomen 2012 is built around the theme of “The Space Between.” 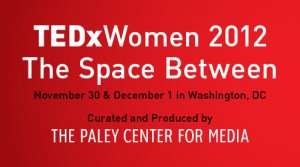 A quick glance at the schedule underscores what organizers are trying to convey in the 2-day event:

Session One: Poverty and Plenty
The space between having a little and having a lot

Session Two: Fact and Faith
The space between what we think we know and what we believe

Session Three: IQ and EQ
The space between our intellectual and emotional intelligence

Session Four: The Mirror
The space between what we see and what is true

Session Five: Stops and Starts
The space between disruption and moving on

Session Six: The Rising
It is the space between seeing and doing; between knowing and responding; between staying in the dark and seeking the light

Moderating duties will be shared by veteran journalist and current president and CEO of The Paley Center for Media, Pat Mitchell, and Vagina Monologues playwright, Eve Ensler. Both women will have the honor of introducing over 50 inspiring women and men who are making a difference in the world.

From Rosie Rios, currently the 43rd Treasurer of the United States and Dr. Elizabeth Kapu’uwailani Lindsey, the first Polynesian explorer and female fellow in the history of the National Geographic Society to Reshma Saujani, founder of Girls Who Code and Latina Lista’s own American Dreams editor Gaby Pacheco, who gained notoriety walking from Miami to DC on behalf of DREAM Act students, the impressive roster of speakers marks the event as a must-see.

And for the first time it will be seen around the globe. This year’s event is partnering with the US State Department to broadcast the event at embassies and more than 800 American Spaces around the world. (American Spaces are defined as “public access venues where Americans and host country citizens come together to for discussions on U.S. policy, society and values.”

“Bringing TedxWomen to overseas audiences, many of whom would never be exposed to the original and creative thinking of the presenters, provides an engaging centerpiece for local events at U.S. Embassies and American Spaces that address such important policy issues as human rights, women’s economic empowerment, and violence against women,” said Dawn L. McCall, Coordinator of the Bureau of International Information Programs at the Department of State.

However, before you think this post is nothing but a big tease – especially if you are nowhere more exotic than your own living room couch, there’s some bright news. Coverage of the 2-day event will be tweeted and available through a special app for the TEDxWomen 2012 conference. There is also the possibility of seeing a few of the sessions live streamed but chances are better after the conference when, as is the custom, the best presentations find their way onto the cyberscreen.

“TEDxWomen has the power to change communities, and when linked together, change the world,” said Mitchell. “Now, more than ever, women have seen their collective power when they work together, share ideas, and elevate each other’s voices.”

Calderón’s Presidency by the Numbers
1 Comment
On this World AIDS Day, Obamacare could prove the lifeline necessary for many infected Latinas