Latina Lista: News from the Latinx perspective > Life Issues > The lack of women sitting on corporate boards is a global problem

LatinaLista — Little girls grow up being told they can be whatever they want to be and no one questions it. Yet, what little girls are not told — and what adult women rarely question — is the fact that women can only get so far professionally. 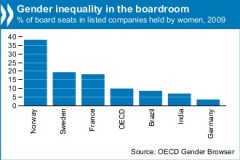 It’s not a new subject. It’s long been known that between men and women there have been wage gaps; discrepancies in treatment by employers; the ability of women to break through the proverbial glass ceiling and an old complaint getting more attention these days — fewer women sitting on corporate boards.

The issue was in the spotlight last month when it was revealed that Facebook — a social media platform whose growth has been primarily fueled by female users — didn’t have one female corporate board member.

“We are disappointed that the Facebook board will not have any women members,” CalSTRS corporate governance director Anne Sheehan wrote in a letter to Facebook founder and Chief Executive Mark Zuckerberg Tuesday. “We believe that investors and the company would benefit from a larger, more diverse board.”

It’s not just happening in the United States.

The international OECD released new data today, culled from their just launched Gender Browser, showing that, according to 2009 data, the most recent available, women occupied only one in ten board seats in listed companies in OECD countries.

This percentage varies greatly across countries: it is highest in Norway, at close to 40%, as a result of a mandatory quota introduced in 2006; In Sweden, France, Slovak Republic and Finland the proportion of women on boards is between 15% and 20%, while in Germany, Japan and the Netherlands, it is less than 5%.

Spain, Iceland, France, the Netherlands, Belgium and Italy have all introduced laws to promote gender equality on boards, setting targets of between 20% and 40%.

As a result of the roller coaster track of corporations inviting women to be board members in Europe, the OECD announced that today the European Union was going to announce new measures to improve gender balance on company boards.

Yet, as mentioned above, women still lag behind men in the workplace in a number of areas. To keep track of the progress women are making around the world in three key areas: Employment, Education and Entrepreneurship, the OECD launched the Gender Initiative.

In addition to highlighting the rate of success and length still to go for women in these key areas, it’s also a tool to help policymakers create programs to boost equality between the sexes.

While there is no conclusive evidence that a company’s performance is boosted by having more women on the board, it is increasingly recognized that greater gender diversity in firms would increase the talent pool for top executives.