Latina Lista: News from the Latinx perspective > Life Issues > The war heard: A Laredo blogger feels explosions, hears gunfire from a war too close to home

The war heard: A Laredo blogger feels explosions, hears gunfire from a war too close to home

LatinaLista — As the debate rages on in Washington about securing the border, reports of stray gunfire, rock throwing, outright intimidation of cartel lookouts on the Mexican side towards American citizens have peppered the news. While all these examples are not common to every border town, most towns do have one consequence of the cartel wars in common — they hear it happening.

Que Fregados blogger, who wishes to remain anonymous, shares her views on what life is like in a town that is literally on the edge of a war. Though she stresses she doesn’t feel unsafe, she does worry for the day if the war does cross the border and if her town has a plan in place to react to it.

As I sat down to write a blog post yesterday (note: now 2 days ago) around midnight, the quiet of the night was interrupted by not one explosion but two. I ran to the door (I know, counter-intuitive) and heard the tat-tat-tat-tat of gunfire. I know that for most people, it is hard to fathom the sounds of a war so close by. 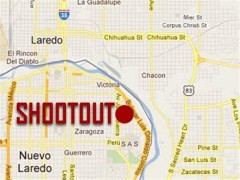 For those of us who live in the neighborhoods along the edge of the Rio Grande, the border between the US and Mexico, it is not uncommon these last few years since the cartel wars have been in full swing in neighboring Nuevo Laredo.

My neighbor called immediately asking if I had heard. Of course I had. Night is the only time the stillness can be broken in such a jarring way. Incidents happen during the day but traffic, the crowds, the daytime hustle and bustle…

Readers, I started writing this post on February 29th. I meant to finish it but time got away from me. Last night, I also heard some light shooting. I know, it sounds odd to say “light shooting” but if you can only hear a few gun shots here and there, it is very different than a cuerno de chivo (a machine gun, usually an AK-47) receiving a response equally as powerful.

I am not scared. I have repeatedly let you know that I don’t fear a battle on U.S. soil. That doesn’t mean I don’t consider the “what ifs…”

At noon, I was at a meeting with various law enforcement agencies. I asked Laredo Police if they knew what had happened the night of the explosions two days ago. At that moment, a Border Patrol agent said there was a massive fight taking place on the Mexican side. He said there were reports near the downtown of Nuevo Laredo but from other sources later, the battle seemed to have been in various parts but concentrating in downtown (check out ValleyCentral.com’s report which is more detailed than our local English media or Univision’s KLDO local reporting).

By coincidence, I had been talking to Assistant Chief Torres about emergency situations and how to notify the general population in cases of evacuation or needing people to stay put. He is usually smiling but I guess my phone in his face made him kick into serious mode.

The topic is not new, I have been asking these questions for a while. I ask because I recall the drills for tornadoes, the emergency sirens being tested once a month, and the meeting points encouraged by city officials in case of home fires. But that was not in Laredo, that was growing up in the Midwest. Here in Laredo, I know of nothing but the reverse911 system that was recently added and that seems to have been used only one time.

The system only works with landlines. Chief Torres also mentioned the possibility, not a for sure, but possibility of beginning to use social media to also get messages out. The Laredo Fire Department uses twitter to notify of the occasional incident but it is too sporadic to be truly useful.

The most frustrating example of the lack of communication to regular Joe Schmoe residents like me has to be the recent explosion of gas tanks in the Heights neighborhood. By coincidence, I was online and I heard and I was surprised that it was coming not from the South but inside the city of Laredo.

My unexpected role was of sharing information, sharing photos, dispelling fake photos, and trying to calm a public with many questions but nowhere to turn to for information except the instancy of social media. The evening news had already been broadcast, the newspaper was being worked on for the following morning and no information was coming from public officials until hours later when fear had already created some chaos.

Even though I had not posted anything on the blog, within those hours, it received well over 1,000 hits in a couple hours from people wanting to know what was happening.

But… this post is about what I hear. Right now, as I type away (12:30am), helicopters have been passing back and forth and back and forth. I haven’t gone outside to see if they are U.S. Customs or other federal agency or the dreaded black ‘copters of the Mexican military which might indicate something else is brewing in our sister city.

As I get ready to go to sleep, I hope to not to be awakened by the sound of gunfire (I am a light sleeper, El Partner doesn’t hear a thing but he knows when I sit up). I still trust that it is not a safety problem for residents on the U.S. side of the border, but I feel for the innocent lives who unfortunately do more than hear the war taking place.

By coincidence, March 2nd will be the opening night for the movie Murder Capital at Hollywood Theater in Laredo, Texas. This is the description of the film about the city of Juarez, another border community across from El Paso, Texas.

While many might consider this a victory, it is not. About 2,000 more murders occurred in 2011, most of them going unsolved.

“Murder Capital of the World” recaps the biggest events in 2011 from this poor, industrial city.

The “old” mayor is the “new” mayor. A controversial new police chief takes the city by storm, a pot-smuggling operation becomes more prominent, a shoot-out at the municipal prison and many efforts to repair the cities violent image are all anaylzed. The upcoming 2012 presidential election in Mexico is reviewed as well.

It sounds like a definite must-see documentary. No more helicopter sounds, now I’m off to relish in the silence of peace.

The Que Fregados blog is written by anonymous women who reside in Laredo, Texas on the border with Mexico.