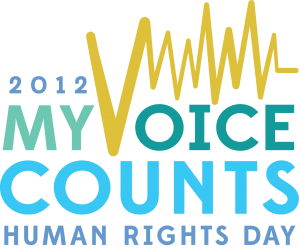 The 2012 theme for Human Rights Day is “on the rights of all people — women, youth, minorities, persons with disabilities, indigenous people, the poor and marginalized — to make their voices heard in public life and be included in political decision-making.”

Part of the activities building upon the theme was the creation by the UN of two Twitter hashtags: #VoiceCount and #AskRights and using the GOOGLE+ Hangout feature to create an interactive experience for people wanting “to engage with senior UN officials and leading experts on the rights of minorities, persons with disabilities, the impact of business on human rights, and beyond.”

It’s obvious that this year’s theme is in direct response to various events around the world — from what is happening in Egypt and Syria to the African continent to what even transpired in the recent US presidential election. The issue of denying a voice to any person is a human rights violation but so is the abuse and intimidation of people based on their citizenship status, their ethnicity, their abilities and their gender.

A benefit of embracing social media within this year’s Human Rights observance is that the conversation doesn’t have to die at midnight, like traditional campaigns. This year, more than ever, the United Nations should keep the conversation alive because amid all the changes happening in the world, there should not be a blind eye turned or voice silenced when Egyptian female protesters are getting raped; children recruited as child soldiers; undocumented immigrants abused by Border Patrol agents, journalists being targeted and killed, and the list, unfortunately, goes on.

featured, Human Rights Day, United Nations
Previous Post Law of Attraction - How to Turn Your Affirmations into Reality: Calling Forth Your Dreams
Next PostOn this Human Rights Day, it's fitting to remember a Latino activist who made fighting for human rights his life

Law of Attraction - How to Turn Your Affirmations into Reality: Calling Forth Your Dreams
Comment
On this Human Rights Day, it's fitting to remember a Latino activist who made fighting for human rights his life