Black, Latina and multicultural women comprise higher percentage of soldiers of color in US military

LatinaLista — Because the military has always been considered a physical symbol of a nation’s strength and prowess, it’s always been automatically associated with men. Commercials trying to make the military an attractive option to young (male) recruits always centered on activities and adventures that boys found interesting. 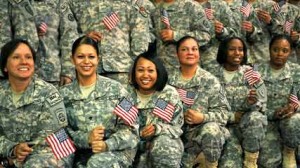 Yet, new data is showing that the Defense Department is going to have to change its marketing strategies.

Almost 15 percent of today’s active-duty troops are women. From journalists filing field reports while embedded with various units abroad, the nation has watched while women soldiers undertake similar, if not the same, responsibilities, undergo the same family separations and endure the same emotional trauma as their male colleagues.

Even active-duty Latina soldiers (13 percent) rank slightly higher percentage-wise than active-duty Latino soldiers (12 percent). It doesn’t look like the trend is going to stop anytime soon. Pew researchers have found that over the last ten years, the number of Latinos enlisting in the military has risen steadily.

The only demographic where men continue to dominate are among whites where comparing active-duty soldiers shows 53 percent are women and 71 percent are men.

With so many women in the military, it’s clear that the Department of Defense and the Veterans Administration (VA) will have to do more to service women’s healthcare and mental health needs, both abroad and here at home.

The VA is trying but if a recent public service announcement campaign is any indication, it may be an uphill battle to change protocols and practices that have been traditionally geared to male soldiers. The PSA campaign was built around one message — women are veterans too.