LatinaLista — Think of domestic violence and images of women bruised and beaten immediately come to mind. Yet, we know there are other types of abusive behavior that leave women just as beaten down. 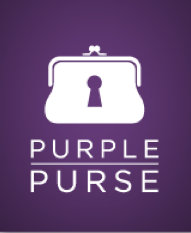 One type of abuse that doesn’t get nearly enough attention is financial abuse. The family’s finances are used to control and hold power over abused women who feel helpless to leave an abusive relationship because they’re afraid of being poor and homeless.

A new national campaign called the Purple Purse wants to turn that fear into financial empowerment. The Allstate Foundation and the YWCA joined forces to create the Purple Purse campaign during October, the month dedicated to domestic violence awareness.

“We’ve found that many women are scared to talk about the issue of domestic violence,” said Patricia Garza, director of strategic philanthropy. “Our partnership with The Allstate Foundation to launch PurplePurse.com provides women an unexpected opportunity to start a discussion about domestic violence so they can learn how to protect themselves and help others.”

As of now, 57 percent of cities cite domestic violence as the top cause of homelessness among women and children. And according to statistics, 74 percent of Americans personally know someone who is or has been abused.

Yet, domestic violence is a very delicate and hard subject to talk about — especially to the women to whom it’s happening. Knowing how difficult it is to get the conversation started in a way that would encourage dialogue about the issue, the creators of the Purple Purse campaign developed a unique website to get the conversation flowing.

The campaign’s web site, at first glance, looks more like an online shopping magazine. With trendy fashion shots, purple purses of all styles pictured across the site and the color purple splashed throughout, the site is immediately familiar, non-threatening and packed with enough information and links to Allstate’s Click to Empower site which provides the financial tools to empower any woman to start thinking about gaining control over her own destiny.

However, the campaign isn’t just for victims of domestic violence. It’s also for anyone who supports these women and their efforts to take a courageous stand. To that end, everyone is encouraged to participate in the campaign by carrying a purple purse or bag throughout October; posting their favorite purple purse pics to PurplePurse.com and downloading the Purple Purse widget, available on the website, to post on their own blogs — to start the conversation about a hard issue that shouldn’t rob any woman of her right to a happy life.