LatinaLista — The 8th Annual AP Report to the Nation was released today by the College Board and, as would be expected, it showed that more public high school students are opting to take the Advanced Placement (AP) test, and more are passing. 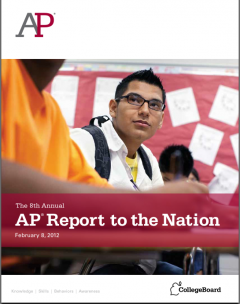 Unfortunately, some are failing too.

Unfortunately, failure results for the AP test are also expected. However, as the report points out, there were an awful lot, almost half a million, students who were academically ready to take the AP exam but didn’t.

Nearly 478,000 of these students did not take an AP Exam for which they had demonstrated potential. In particular, American Indian/Alaska Native, African American and Latino students with high levels of readiness for AP were much less likely than their white and Asian peers to take a recommended AP Exam.

Either these students lacked the opportunity — they didn’t have the necessary AP classes at their schools — or the encouragement — teachers and administrators didn’t recognize the student’s potential or desire to challenge themselves and/or improve their educational choices — or the motivation.

The report’s authors stress that while AP classes are on the high school agenda of more students, too many students of color, as the half a million statistic illustrates, are still being left behind in getting a head start in their aspirations for a college education.

When it comes to Latino students that’s true for everywhere but a handful of states, yet especially for Florida.

The benefits of taking an AP exam don’t just translate into getting into college but also finishing college, earning a degree — and getting a job with a salary decent enough to make ends meet with a little left over for savings.

Previous Post International Video: A medical mystery in Nicaragua killing off sugar cane workers
Next PostSantorum's stance on Christian values sounds like a political platform to further intolerance against the undocumented and minorities

International Video: A medical mystery in Nicaragua killing off sugar cane workers
Comment
Santorum's stance on Christian values sounds like a political platform to further intolerance against the undocumented and minorities