Latina Lista: News from the Latinx perspective > Life Issues > Youth > Latina at the wheel: Changing NASCAR one race at a time

Latina at the wheel: Changing NASCAR one race at a time 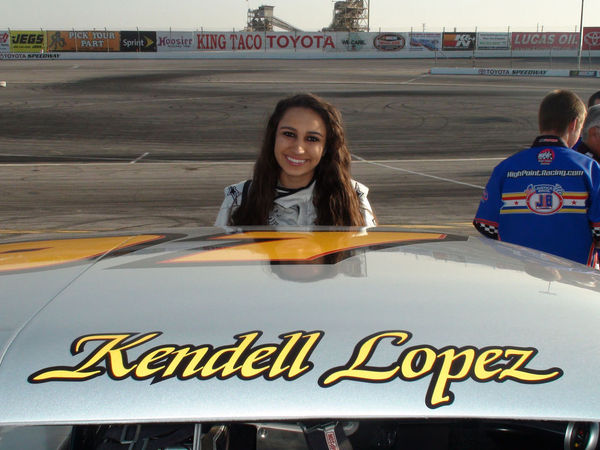 Latinos have risen to places of prominence in every walk of life in the United States, from politics, industry, and education to entertainment, journalism, and yes, car racing too. Kendell Lopez is part of a new generation that is building a successful future, while inspiring others, regardless of humble beginnings and very limited opportunities, to beat all odds and land at the top of their careers.

Kendell’s story is a sort of a fairytale. However, her dreams are becoming a reality, and today she is NASCAR’s only Latina development driver. She also represents the so called Show-Me-State as the current Miss Independence.

Racing has been a part of Kendell’s life for a decade, and she’s only 22.

Her first series of competitive events was part of a Go-Kart system. “I was 14 years old at that time, but I’ve been involved since I was 12,” said Lopez who was very cheerful on the phone from her hometown in Independence, Missouri, because just minutes before our conversation she had a meeting with potential sponsors to endorse her for the upcoming nationwide season.

“Our family summer vacation in Disney changed my life, literally. I discovered what I really wanted to do,” she said.

It was on that vacation that Lopez was exposed to the Richard Petty driving school in Florida. It didn’t take long before she was hooked.

“It was the best vacation I’ve ever had. It changed my life,” she said while describing the “awesome” experience she had so close to a NASCAR race car. “You could feel the adrenaline in the air.” And she did feel it, because she came back home with one single thought: “To be a race driver.”

Lopez never stopped believing in her dreams. She insisted over and over again, knocking on doors and making phone calls. Finally the I-70 Speedway gave her a chance to be part of the mechanic crew team, which more or less meant helping with cleaning and organization.

For months, she could not help but smile as she raced – not in a car yet – to assist with the dash car team, then with the super stock team and lastly with the super late team. “It was a wonderful experience. Really good. I enjoyed every minute of it,” she said while describing how much she learned about the mechanics of the racing cars. “Every day, I had to remind myself that all I was seeing was real.”

In 2009, she was invited by Toyota Speedway Shootout as a crew member for two teams. “It was so much fun,” she affirmed with no hesitation. “I had the opportunity to learn many things.”

Her hard work at the shootout paid off, and Lopez proved herself to be a shining example of how perseverance opens doors. “I was invited to become a driver in the new S2 division,” she said. “So, I accepted. Of course, I did!

Lopez made the cut, even taking the Pole Position during her first race. “I am the only female to do so at the Toyota Speedway of Irwindale [California],” she said. “It was amazing. I still remember it.”

Lopez pushed the gas to the max during the 2009-2010 season. “I always want to give the best of me. Besides, every win is not only part of me, but it goes to my family and to our community too,” she said. “Racing has given me a great chance to break stereotypes. It is a tough sport, even more so if you are a woman and much more if you are Hispanic. That’s the reason I enjoy it so much, because I can show that we really can do it.”

“Racing is a powerful tool to help young Latinas,” explained Lopez. “Mentoring is deep in my heart,” she said. “The value of any success is linked to the impact you can have on your community. That is the reason I like to be a role model for Hispanic girls. I want to show them that dreams are possible. Some of them may be harder than others, but at the end of the day, everything is possible. You can show them the value of self-discipline and how to focus on your goals. We can all find opportunity in our own community, but we need to think that we will achieve our dreams.”

Her advice for young Latinas is straightforward: “Stay in school and fight for your dreams. Don’t let anyone tell you that you will not achieve your dreams.”

Lopez modestly attributes her success to having great mentors, taking stretch assignments, focusing on performance and loving what she does: Racing cars and conquering dreams.

And as she confessed: “Celebrating every win with ‘carnitas‘ and listening to Pitbull.”

The Future
In order to be able to participate in the 2014 NASCAR Nationwide Season, Lopez must run in at least six races. The logistical and operational cost is about $250,000. She has started an IndieGoGo campaign to fund her competitive series.