Latina Lista: News from the Latinx perspective > Life Issues > Youth > Latina teens more likely to be haunted by depression and thoughts of suicide 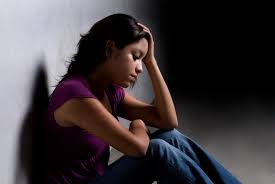 Aurora Uc lives with her parents and younger sister in a working-class apartment complex in Alhambra, Eastern Los Angeles, home to many other immigrant families.

Sitting on the carpet of her living room, Aurora looks like a typical teenager: She’s wearing colorful pajama pants and a t-shirt, a ring on each of her fingers, and her curly hair tied up in a high ponytail. She’s checking her smartphone every couple of minutes.

When she turned 15, that’s when things started going downhill, she says. She had a boyfriend who was manipulative and possessive — but that was only part of her problem; she’d been bullied at school for years, her grades were on a downward slope, and she felt disconnected from her family.

She became very withdrawn. When her parents got another bad progress report at school, Aurora felt she couldn’t handle things anymore, so she ran away.

“When she ran away from home, her dad and I were in shock,” says Aurora’s mom in Spanish, who shares her daughter’s first name. “What’s happening with this girl? You have no idea what it’s like for a person who’s locked up in her room, who doesn’t want to come out and won’t stop crying.”

After a series of frantic calls and more than a few visits to her local church, Aurora’s mom finally found the

To add to all this, Latinas tend to underutilize mental health clinics for their emotional problems because there are so few, accessible, culturally appropriate, and affordable services out there.

The consequence is that depressed and bullied Latina teens, like Aurora, are 1.5 times more likely to attempt suicide. Though Aurora is one of the fortunate ones whose depression didn’t lead to any suicide attempts, the majority of girls who suffer from depression can’t fight off the thoughts of taking their own lives.

According to officials with the World Suicide Prevention Day observance:

A large proportion of people who die by suicide suffer from mental illness. Recent estimates suggest that the disease burden caused by mental illnesses will account for 25% of the total disease burden in the world in the next two decades, making it the most important category of ill-health (more important than cancer or heart diseases).

However, suicide is a statistic that can easily be averted with proper mental health intervention.

“Did you even know I was coming that day?” asks Eugenia, facing Aurora in her living room and reminiscing about the day the two young women met. “No? OK, so I basically ambushed her, I knocked on the door and ambushed her,” she says, laughing.

When Eugenia showed up — an approachable, second-generation immigrant who’d also struggled a bit in her teenage years — the two women realized that both of their families came from the Yucatan peninsula — and they hit it off.

“In Latino families, our family is our resource, and we need to fix it within here,” says Eugenia. “Even if stuff is killing me I’m not going to talk about it, because then I don’t want to shame my family or I don’t want them to think bad of me, that I couldn’t fix it.”

But even as Aurora began to show signs of improvement with talk therapy, Aurora’s mom had trouble understanding what had gone wrong. To her, it was simple: Life in the US was harder to deal with, than in Mexico.

“How come I hadn’t suffered from the same thing when I was her age?” she asks. “In Mexico, kids weren’t cruel like they are here. There are so many factors that make life in the US more difficult; that make the bubble that is our everyday life, explode.”

Acculturation has long been known to be a factor with suicide attempts among Latina teens. In 2010, Dr. Soad Michelsen, MD, child and adolescent psychiatrist at Clarity CGC, presented a five-part webinar series on teen Latinas and suicide and included a variety of examples of how Latino culture exerts stress felt by these girls which leads to depression and other mental health issues.

According to Dr. Michelson, the clear difference between why Latina teens experience such depression versus their own mothers is because the mothers are experiencing, to a much lesser degree, acculturation, from an adult perspective. They also have the option of retaining a social circle with only other Latinas and/or Spanish-speakers. Their daughters can’t do the same.

“Latina teens go into the high school and they have to (immediately) adapt; that’s survival,” Dr. Michelson said. “They have to start adapting and start assimilating the culture because if that’s not the case, can you imagine how conflicting that would be for the girls.”

These days, Aurora is able to control her depression on her own. She’s enrolled in community college classes — and trying to decide whether to study computer science or accounting. She’s also working as a food server at a nearby family restaurant. And she’s no longer in therapy or medication — but the insights; they’re all there.

“Mostly when I’m by myself, I’m always like, ‘Aurora, embrace who you are.’ I’m loud, be loud, it’s who you are. And I don’t care about being called crazy anymore, I like it. My mom calls me crazy, my little sister, too. My friends call me crazy — but I’m not really crazy,” she says, jokingly.

Ruxandra Guidi is a freelance print and public radio journalist, based in Boulder, Colorado. The article was funded by by the Institute for Justice and Journalism