LatinaLista — You know student debt must be a big problem when it becomes a talking point on the presidential campaign trail. As of the end of March, total student loan debt among borrowers under 30 has reached $292 billion, according to recently released data by the Federal Reserve Bank of New York. 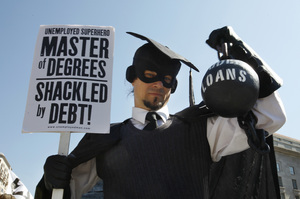 In fact, student debt is the biggest form of consumer debt outside of mortgages. Another site that tracks student debt, Project on Student Debt, published a study that found two-thirds of college seniors who graduated with loans in 2010 carried an average of $25,250 in debt.

While the news isn’t good, for younger borrowers it’s better than for those over 30. Under-30 borrowers have a better rate of repaying their loans than older borrowers. Inside Higher Ed reports that:

Borrowers in their 40s, on the other hand, have a delinquency rate double that of their younger counterparts, at about 12 percent.

Over the past seven years, the ranks of borrowers over 30 have continued to grow as former students with longstanding loans continue to chip away at balances and new, nontraditional students took on debt for the first time. Borrowers in their 30s or older made up 54 percent of all student debtors in 2005; by early this year, they were almost two-thirds of all borrowers.

Paying back student loan debt seems like a no-brainer — pay what is due each month or if you can afford it, pay a little more. Yet, very few have an actual strategy plan to pay back their student loan debt. The latest web site to address student loans features such help.

Dubbed the National College Finance Center (NCFC), it was launched yesterday by GLEE actress Jane Lynch. The site, with the companion ad campaign tagged “Dont Major in Debt,” is divided into two parts — financial aid advice for students needing to know how to pay for a college degree and repayment advice for graduates or those for whom deferring payment is no longer an option.

What is different about the site is that in the repayment section, the site supplies information on different repayment options, a link to get a person’s federal loan information and after answering a series of short questions, even creates a personalized repayment plan.

The key is to follow through with the plan. It’s bad enough to have student debt but when student debt lasts into middle-age it’s not surprising that analysts see student loan debt as the next mortgage crisis.