LatinaLista — If ever there was any doubt if the American people were in favor of or against the DREAM Act, a new poll should re-highlight the public’s sentiment on the issue. 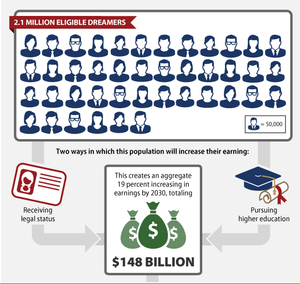 A national survey of registered voters’ views on immigration, commissioned by the Vernon K. Krieble Foundation, found that the majority of Americans favor the DREAM Act.

The approval for the DREAM Act is warranted according to an economic analysis released by the Center for American Progress. The study finds that if the DREAM Act was passed today it would add $329 billion to the U.S. economy and create 1.4 million new jobs by 2030, “a significant boost to our nation’s fiscal health.”

An interactive map details how many DREAMers reside in each state, how many jobs would be created and the tax revenue generated from them. In every case, there’s money for cash-strapped states and local communities to make from this untapped source already living in these communities.

Given the favorable public opinion poll and the economic breakdown of how their legalization would benefit states, it appears there is finally a perfect storm on the horizon for passing the DREAM Act.