LatinaLista — Being a teen — stuck in those in-between years when you’re not really an adult but sure don’t feel like a kid — is harder than ever. It used to be that anyone over the age of 16, who wasn’t in school, could at least find a job. 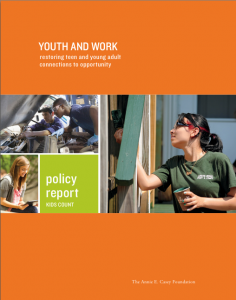 The global economic shake-up is targeting young people and people of color the worst with few job opportunities. A new report by the Annie E. Casey Foundation, YOUTH AND WORK — restoring teen and young adult connections to opportunity finds that “youth employment is at its lowest level since World War II; only about half of young people ages 16 to 24 held jobs in 2011.”

Recounting how in the past it wasn’t always necessary for young people to have a high school diploma to get a decent paying job, the report’s authors reveal a new reality where today’s ‘Mcjob’ and retail workers are just as likely to have college degrees and more experience and beating out unskilled, non-degreed or ‘disconnected’ young workers.

This shift in the employment picture spells bad news not just for cash-strapped young people but for the nation when it comes to suppporting 6.5 million 16-to-24-year-olds who are both out of school and out of work.

According to the report, there are more Latino youth, ages 16-19, who are ‘disconnected (16 percent) among all youth;’ versus 29 percent of young African American adults, ages 20-24, who hold the disconnect distinction among their peers.

Yet, as the report underscores, the job problem of these older teens and young adults goes beyond not having a job.

Studies show that youth who miss out on an early work experience are more likely to endure later unemployment and less likely to achieve higher levels of career attainment. Those shut out of the labor market for considerable periods, especially in the early stages of their careers, have markedly reduced prospects for later con- nections to jobs.

The authors of the report created a list of recommendations to combat this crisis-in-the-making. Namely, it involves providing a multi-faceted approach to reaching disconnected young people by encouraging them to return to school and/or provide the training they will need to work in the future economy by providing internships, apprenticeships, and/or part-time jobs, volunteer or community service positions to put them on the right track for developing interpersonal and professional skills that will prepare them for a future that will demand more of every worker, regardless of their age.