LatinaLista — A new study released by The National Campaign to Prevent Teen and Unwanted Pregnancy and America’s Promise Alliance erases any doubt how schools factor in determining if students become teen parents. 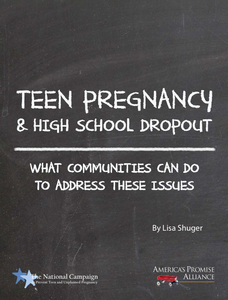 Teen Pregnancy and High School Dropout: What communities can do to address these issues reveals that in 2008 in counties and cities where 25 persistently low-achieving school districts are located births to teens accounted for 16 percent of all teen births in the United States.

In addition, those same 25 school districts also had 20 percent of all high school dropouts in the U.S.

The high school dropout rate in this country continues to be a crisis; nearly one in four Americans and four in 10 minorities do not complete high school with their class.

Thirty-four percent of teen mothers who drop out of school never get their diploma or GED. The economic consequences for these young women, their children and society are predictable — a life either dependent on social services or minimum wage jobs that are proving less and less effective in giving families a basic decent quality of life. Not to mention perpetuating a cycle of poverty within that family.

However, to its credit, the report doesn’t just dwell on the negative and dismal statistics. It profiles a few programs and research happening in communities across the nation that have been created to battle this two-prong challenge. For example:

Memphis Teen Vision (MemTV). MemTV is a collaboration among 25 community organiza- tions whose goal is to reduce teen pregnancy and improve pregnancy outcomes among Memphis teens.

West Virginia State Superintendent of Schools, Dr. Jorea Marple, and the Cabinet Secretary of Health and Human Resources, Dr. Michael Lewis developed digital teen pregnancy data “booklets” created for each county in the state. These booklets include data on the teen birth rate, the percentage of births to unmarried teens, and academic outcomes such as the percentage of high school dropouts in each district. Pairing teen birth and dropout statistics together in a format that is easy for educational administrators to access is a critical step in drawing the connection between these two issues in West Virginia’s public schools.

The report also explains what communities can do to combat the problem. The bottom line is that it’s all about education. From educating the teens with credible and reliable sexual health education to educating the teachers, parents and community leaders about the issue, its impact on school performance and the future of the local economy.

While the report is a good first step, more of an effort needs to be made to ferret out those programs that are working in communities and school districts across the nation and assemble them into one resource. At this stage of the game, it doesn’t make sense to reinvent the wheel — because there’s no time to lose.