LatinaLista — From the Occupy movement to the immigration marches to civil rights rallies, each gathering has included a large number of young people, especially people of color, who are making their presence seen and their voices heard. 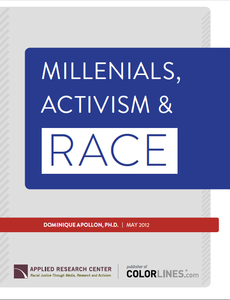 For anyone who has ever wondered why there seems to be an increase in social consciousness among young people these days, a new report released by the Applied Research Center titled Millennials, Activism and Race sheds light on their motivations, the social justice issues that have stirred their passions and their attitudes towards race, government and representation.

In a series of nine focus groups in five cities across the country, young progressives were asked about their motivation to become engaged with social justice issues. Their answers boiled down to two main motivators: personal experience and disillusionment.

Whether it was having an undocumented parent, witnessing discrimination or being a victim of it themselves, their experiences made fighting for social justice causes personal for young people and incited an urgent passion for change. Disillusionment with the electoral process, government, the top 1 percent, etc. have fueled a reaction that is manifesting itself in street protests, online petitions and a greater demand to be heard.

According to the report, the top five social justice issues important to the young people surveyed were:

Immigration is in sixth place. Yet, the reason may be because, of the respondents surveyed in the focus groups, only 12 percent were Latino and 23 percent black. Yet, regardless of their race (47 percent surveyed were white), it’s clear that the millennial generation is concerned about fairness, equality, humane treatment of one another and the planet and how to provide help to the most people — outside political solutions.

The report’s author cites an analysis by the Institute of Politics that found that the high sense of political
spirit and activity noted in the years following 9/11 through 2008 is diminishing. “For example, in nearly every attitudinal measure related to the efficacy and importance of political engagement, the attitudes and opinions of Millennials continues to slowly grow more negative.”

The survey found that the negativity stems from barriers Millennials see that block achievement of an ideal society:

The primary barriers include: (1) a dominant ideology based on individualism (especially economic), which too often causes people to be left to fend for themselves, without sufficient public resources and supports, and (2) a general lack of awareness of histories of oppression with political and economic analyses, that the general public doesn’t have an analytic framework to critique our political and economic system. Additionally, Occupy protesters were more explicitly anti-capitalism, and more profoundly disillusioned by the electoral process than social justice advocates who had not participated in the Occupy movement.

While many may say that an “ideal society” is not a realistic achievement, it’s clear that such a goal gives Millennials the motivation to speak out against social injustice and help forge a new direction for the country.

featured, social justice, youth
Previous Post Micro loans make everyone a philanthropist
Next PostMore than ever it makes sense for political campaigns to be bilingual