LatinaLista — “Stay in school” has been a directive drilled into the minds of Latino youth from the time it was discovered that the true path to achieving the proverbial American Dream lay inside the doors of the neighborhood school. Over time, when Latinos achieved the disgraceful distinction of dropping out of high school more, getting pregnant in their teens more often, disrupting classes too much, there was real fear that Latino youth would never be capable of anything beyond a dead-end job and remedial classes. 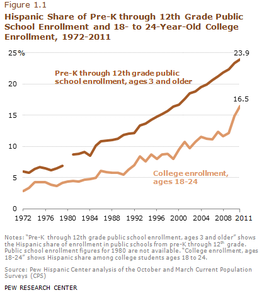 Thankfully, those fears have been proven to be unfounded.

A new analysis by the Pew Hispanic Center finds that Latinos are the largest minority group on the nation’s college campuses.

It’s not just Higher Education where Latinos are making their presence seen but also in elementary and high schools. According to the report:

So what does all this mean?

In 2010, the number of Latinos who received a bachelor’s degree reached a record 140,000 recipients, according to data published by the National Center for Education Statistics of the U.S. Department of Education (Snyder and Dillow, 2012). A record number of associate degrees were awarded to Latinos in 2010 as well—112,000. In both cases, Latinos are a growing share of all degree recipients—13.2% among those with an associate degree and 8.5% among those who received a bachelor’s degree in 2010.

Also, it means that more Latino students are taking high school seriously and graduating to go on to college.

The Pew Hispanic report shows that while Latinos still hold the distinction of dropping out of school more often than their peers, the rate has gone down — from 18.5 percent in 2010 to 16.3 percent in 2011.

It’s a promising trend that shows Latino youth are getting the message. It’s just up to the leadership of this country to improve job prospects to put those degrees to work.