LatinaLista — By her own admission, 18-year-old Audrey Vivar has always been a “little ambitious and nerdy.” Two qualities that helped this recent high school graduate of New Tech Manor High School outside Austin, Texas finish her senior year with a distinctive list of accomplishments — Key Club president, Student Council member, National Honor Society co-historian, Valedictorian of her class and — creator of a scholarship for undocumented students. 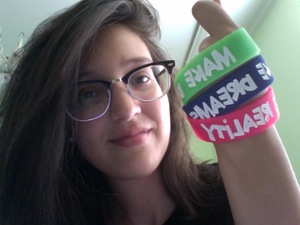 Attending an untraditional school where students learn through project-based learning, Vivar was challenged to do one last senior project. She didn’t know what she wanted to do until she started looking at her own life and surroundings.

“I’ve always had an interest in immigration,” Vivar, the daughter of a Mexican-born mother, told Latina Lista. “And I was always friends with undocumented students. I’ve done a lot of (school) projects on the DREAM Act to the point that I’m addicted to the issue and I realized that where I was born (El Paso), just a few miles north of the US-Mexico border, was the only difference between me and my friends who are undocumented.”

Raised by her parents to know that she could achieve anything she wanted if she worked hard, Vivar knew that while a strong work ethic could propel her towards new opportunities, it wasn’t the case with undocumented students. No matter how hard they worked they could never have the same opportunities as she.

That was especially true for all the undocumented seniors in her small school district who aspired to college. While Texas allows in-state tuition for undocumented students, the students still can’t qualify for any kind of federal financial aid or scholarships where a Social Security number is needed for the application. It wasn’t long before Vivar knew what she wanted to do for her last class project.

Next was raising the money for the award. Vivar ordered 300 pink, blue and green silicon bracelets sporting the scholarship logo. Sold for $3 a piece, Vivar approached her classmates, students at the other two high schools in her district, teachers and community businesses to either buy a bracelet or donate money to the cause.

“I would sell the bracelets and advocate for the DREAM Act at the same time,” Vivar said.

Not starting until spring to raise the money, Vivar was crunched for time and created a Facebook page where she posted pictures of the bracelets and kept people informed of her goal. It wasn’t long before Vivar surpassed her goal of $500 by selling about 200 bracelets. Yet, she didn’t yet have the scholarship application available.

Creating a separate website in May, weeks before graduation, where students could go to apply for the scholarship, Vivar was thrilled that four students applied. A committee judged the applications and chose Manor High School student Nelly Reyna as the first recipient of the scholarship.

“I didn’t help select the winner because I would have been biased,” Vivar confessed. “But I did review the applications.”

In an ironic twist of fate, both Vivar and Reyna are heading to the University of Texas in Austin in September. Vivar plans to major in advertising and communications and has a special interest in marketing, but her dream job is to one day be a director of a non-profit.

Her other dream is to keep her scholarship active and she wants to raise $1,000 to award next year to Manor high school students.

“I’m not sure if we would award one $1,000 scholarship or give two scholarships,” Vivar said. “But I know I can raise even more money at UT because there are more people who have already been advocating for the DREAM Act.”

college, featured, scholarship, undocumented
Previous Post Should Race Be A Political Factor In The Treatment Of Childhood Asthma?
Next PostLatino high school valedictorian delivers speech in Spanish —and it's no big deal

Should Race Be A Political Factor In The Treatment Of Childhood Asthma?
Comment
Latino high school valedictorian delivers speech in Spanish —and it's no big deal