LatinaLista — When Congress failed to pass the American Jobs Act, they did more than block yet another proposal by President Obama — they took away the hope millions of teenagers have in finding a job to pay their own bills and help out with school expenses. In these hard economic times, there are families even depending on their teens to bring home money to help keep the roof over all their heads and food on the table. 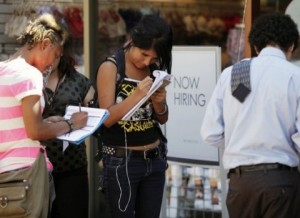 In the original jobs bill, the Obama administration had asked for $1.5 billion for “high-impact summer jobs and year-round employment for low-income youth ages 16-24.” When the bill didn’t pass, the federal government partnered with some private businesses to create job opportunities for teens. Though the amount of opportunities created was a whole lot less than what over a billion dollars could buy — 180,000 jobs for low-income teens in 2012 — the White House is pushing to build on that 180,000 so that 250,000 jobs will be available to low-income youth by the start of the summer.

As it stands now, young people comprise the highest sector of the labor force unable to find a job.

The White House kicked off an initiative today called Summer Jobs+. It’s billed as a call to action for businesses, non-profits, and government to work together to create jobs for low-income youth. While some may say that this type of three-way partnership is exactly what is needed to control Washington’s spending, it also points to the severity of the problem and how not doing anything could have huge negative ramifications, as well as, doing too little.

According to a new report about youth who are not engaged in school or work, about 6.7 million or 17 percent of 16-24-year-olds are not going to school or have a job. Their limbo status is cheating the country out of their “human capital” and economic contributions. The report refers to these young people as “opportunity youth.”

These youth are disproportionately male and from minority groups, but substantial rates are found for all youth groups. Opportunity youth may have dropped out of high school or college and been unable to find work; may have been involved in the criminal justice system; may have mental or health conditions that have inhibited their activities; or may have care-giving responsibilities in their families.

The report’s authors calculated what these “opportunity youth” cost taxpayers — In total, a 20-year old opportunity youth will impose a full taxpayer burden of $235,680 and a full social burden of $704,020. These are lump sum amounts expressed in 2011 present value dollars.

In these hard times, those are costs that should be avoided and can easily be, even recouped, if these young people were given the opportunity to work and/or receive training for the kinds of jobs they can and want to do.

Just imagine how much richer the nation would be if not only “opportunity youth” were working, but within that segment, the undocumented youth allowed to legally work too?