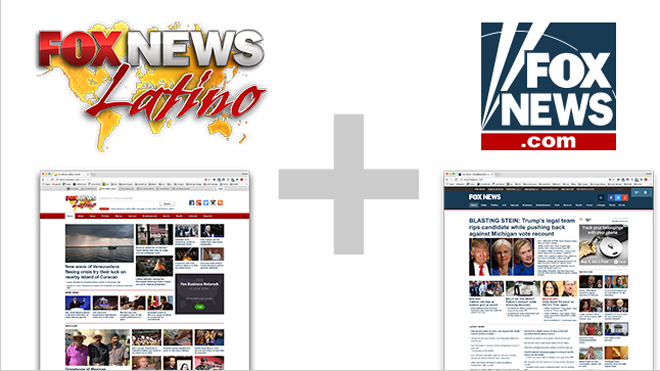 LatinaLista — Once upon a time Latinos were the darling of mainstream media. The major networks couldn’t do enough to tap into what they considered our sexy attributes: an influential market, a consumer-spending powerhouse and a political “sleeping giant.”

It seems we have lost our sex appeal.

One by one, the major networks, who courted the Latino market with dedicated/standalone Latino-centric news sites, have decided the love affair is over.

Whether it was NBC disbanding NBCLatino, CNN shutting down CNNLatino or Disney, the parent company of ABC, breaking its partnership with Univision’s Fusion or Huffington Post dissolving its Spanish-language Voces, little by little, the major networks have been pulling their investments.

The latest casualty in this purge is Fox News. Today, the conservative news organization announced that Fox News Latino (FNL) will cease to exist and all Latino-centric content will be distributed throughout the news organization in appropriate sections.

According to Fox News management:

This will allow more FNL stories to be seen by the larger Fox News audience across all platforms – including Fox News mobile, apps, Apple News, and Facebook Instant Articles.

The legacy media trend of classifying Latino coverage as a “section” rather than its own “department” can be a good thing if the coverage is given equal treatment as the other sections. But that doesn’t always happen.

For instance, the one example that is always brought out to underscore the difference in media treatment is “the missing white woman syndrome.”

There’s been found an unnatural media bias to promote and/or cover the story of missing white women more in-depth than those stories of missing women of color. If a Latina woman was missing, that story is highlighted on a Latino-centric news site but would it be on a general news site?

I am cautiously optimistic that Fox News sudden decision to integrate Latino-centric stories into their mainstream is a good thing if:

1. No Latinx writers from Fox News Latino were laid off — We are still a growing demographic and with a new administration making noise about targeting some in the greater Latino community, more writers who know the community, understand the culture and, when necessary, speak the language is only a good thing when providing respectable coverage.

2. There is a balanced diversity in the newsroom — Almost every newsroom in the country suffers from low to non-existent newsroom diversity. Effective coverage of any non-white demographic can’t be given the justice it deserves if only one perspective is represented in the newsroom.

3. Stories with Latino subjects are given equal treatment and highlight — Not every story will be a major headline centerpiece but all stories deserve to be weighed on the merits of its elements.

4. There is not a reduction in posting of Latino-centric stories — Downsizing a department should not mean the same for the work its people was doing.

Integrating Latino coverage into the mainstream can be a good thing as long as the media sees Latinos as separate — we still have our own unique set of challenges — but equal.

ethnicity, latino, mainstream media
Previous Post How can we learn to reject fake news in the digital world?
Next PostSugary Drinks Can Seriously Impact Health for Latino Preschoolers

How can we learn to reject fake news in the digital world?
Comment
Sugary Drinks Can Seriously Impact Health for Latino Preschoolers