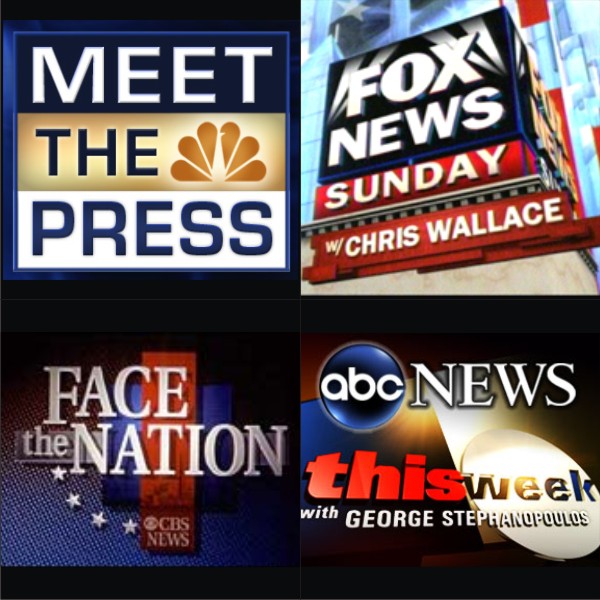 Sunday shows in both English and Spanish treat Hispanics as a single-issue constituency focused on immigration, according to a Media Matters analysis that examined the shows’ discussions and guests from August 31 to December 28, 2014. While Latinos make up more than 17 percent of the U.S. population, the report found that only 7 percent of guests on English-language Sunday shows were Hispanic, of which 46 percent spoke specifically about immigration. The report also found that while the Spanish-language Sunday shows devoted great attention to immigration, they gave much less coverage to issues of similar importance to the Latino community. Confining Latinos’ perspectives to a single issue damages their ability to engage in discussions about the other equally important issues that affect them and the general electorate.

English-Language Shows Often Treat Hispanic Guests As Experts Only On Immigration. Media Matters analyzed discussions on seven English-language Sunday shows — ABC’s This Week, CBS’ Face the Nation, Fox Broadcasting Co.’s Fox News Sunday, NBC’s Meet the Press, CNN’s State of the Union, and MSNBC’s Up with Steve Kornacki and Melissa Harris-Perry — and the two most important Spanish-language Sunday shows — Telemundo’s Enfoque and Univision’s Al Punto. The analysis covered 18 weeks of shows, which included the peak of the 2014 midterm election season and its aftermath. These shows affect the political agenda and policy conversations — conversations that become increasingly important in election season. This analysis highlights two symptoms of this single-issue syndrome on Hispanic inclusion. On English-language shows, Hispanic guests are treated as experts in only one subject, rarely invited to discuss issues other than immigration, and the Spanish-language shows prioritize immigration coverage over discussions of other issues that Latinos have identified as important to them.

Spanish-Language Sunday Shows Focused Significantly More On Immigration Than On Other Issues Of Similar Concern To Their Audience. Spanish-language Sunday shows devoted a significant amount of discussions to immigration, rarely discussing other domestic political issues that concern their audience just as much. Immigration was discussed almost nine times more than jobs and the economy and 26 times more than education, while health care was never discussed on these shows during the period of the study.

Latinos Express Strong Interest In Many Issues Including, But Not Limited To, Immigration. In an October 2014 study, the Pew Research Center found that the “relative ranking of issues among Latino registered voters is similar to the ranking for all Latinos,” meaning that the general population of Latinos thinks much like the voting population of Latinos. The results of the survey, which are consistent with research Pew has been conducting since 2004, also demonstrate that like Hispanic voters, the general Latino population has multiple, overlapping political priorities. The charts below show that almost every Hispanic (four out of five) said that education, jobs and the economy, and health care are either extremely important or very important to them personally, whereas three out of four Latinos said immigration is either extremely important or very important.

[Pew Research Center, 10/29/14]
Top Issues For Hispanics During The Midterms Were Very Similar To Those Of The General Electorate. The general electorate, much like Hispanic voters, identified the economy, health care, and immigration as top issues for the 2014 midterm elections, according to a September poll by Pew — suggesting that priorities for the Hispanic community are not very different from those of the general population of voters. [Pew Research Center, 9/12/14]

Foreign Policy, Midterm Elections, And Immigration Were Frequently Discussed On Sunday Shows. The top three issues discussed on the Sunday shows were foreign policy, the 2014 elections, and immigration. Far less coverage was devoted to the three issues that Hispanics say are most important — education, jobs and the economy, and health care:

English-Language Shows Focused On Elections Much More Than Spanish-Language Shows. On English-language Sunday shows, the 2014 midterms and speculation about the 2016 elections were the second- and third-most popular topics of discussion, accounting for over one-quarter of all discussions. In comparison, Enfoque and Al Punto collectively devoted about 8 percent of their discussions to the 2014 elections and the candidates’ positions, while focusing 21 percent of their discussions on immigration. The purposeful coverage of immigration by Spanish-language political talk shows has been instrumental in helping to keep the issue at the top of the national political agenda and to prod for much-needed policy action.

Spanish-Language Sunday Shows Should Provide A Platform To All The Issues That Matter To Latinos. A New York Times profile of Al Punto host Jorge Ramos dubbed him the “voice of Latino voters,” highlighting his influence in policy discussions that affect this constituency. In the same piece, Ramos is quoted noting that the economy and education are important issues for Latinos, “just like for the rest of America.” Nevertheless, his show focused little on jobs and the economy, health care, and education, despite the debates that 2014 midterm election candidates across the country were having on health care and education policies that would substantively affect Latino communities. The same can be said for Telemundo’s Enfoque. [The New York Times, 1/23/15]

Latinos Are Disproportionately Affected By The Affordable Care Act, Yet Al Punto And Enfoque Featured Zero Discussions About It. Despite the Affordable Care Act’s disproportionate impact on the Latino community, neither Al Punto or Enfoque discussed this particular law during the 18-week period analyzed by Media Matters. The U.S. Department of Health and Human Services says that “as many as 1 in 4 of the U.S. uninsured population is Latino.” As of June 2014, 2.6 million Latinos between the ages 18 and 64 had gained health insurance since the initial open enrollment period in 2013, accounting for “a 7.7 percentage point drop in the uninsured rate over that period.” [HHS.gov, 11/5/14]

From August 31 Through December 28, Only 7 Percent Of Total Guests Hosted By English-Language Sunday Shows Were Latino. Of the 1,210 guests invited on to English-language Sunday shows, 79 — or 7 percent of total guests — were Latino. According to the most recent data U.S. Census Bureau, 17.1 percent of the population identify themselves as Hispanic or Latino. [Census.gov, 2/5/15]

CNN’s State Of The Union And Fox News Sunday Included The Most Hispanic Guests Of The English-Language Shows. Fox News and CNN outperformed the other English-language shows in terms of the number of their Hispanic guests as a percentage of all guests, each reaching 10 percent.

Inclusion Does Not Necessarily Account For Diversity Among Hispanic Guests. The rate of inclusion does not necessarily account for diversity of guests. For instance, Fox News contributor Juan Williams appeared nine times over the 18-week period as a regular participant on Fox News Sunday’s roundtable discussions, accounting for 60 percent of all Hispanic guests invited to the show. Were Williams not a regular contributor, Fox News Sunday’s rate of Hispanic inclusion would have been 4 percent. CNN hosted a wide array of Hispanic guests, including Sen. Ted Cruz (R-TX), Rep. Xavier Becerra (D-CA), CNN political contributor and Republican strategist Ana Navarro, Democratic strategist Maria Cardona, Housing and Urban Development Secretary Julian Castro, and Rep. Joaquin Castro (D-TX) — one time each. Comparably, Melissa Harris-Perry hosted 15 Latino guests, of all but two of whom appeared only once.

Sunday Shows On NBC, CBS, And ABC Were The Least Inclusive Of Hispanic Guests Overall. The analysis found that NBC’s Meet the Press hosted four Hispanic guests out of a total of 159 guests (3 percent) over the 18-week period examined. CBS’ Face the Nation invited a total of 161 guests, of which five (3 percent) were Hispanic. On ABC’s This Week, a total of 185 guests were invited on, of whom 6 percent (11) were Hispanic.