National population campaign counts down to when planet hits 7 billion mark on Oct. 31

LatinaLista — This year, October 31, 2011 will mean something more than just a day when kids and kids-at-heart dress up in their favorite costumes, try to scare each other and go trick-or-treating. 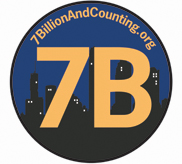 It actually will mark a very scary milestone — when the planet will have a world population of 7 billion people.

The world’s human population has doubled since 1970 and shows no signs of letting up. The United Nations predicts the planet will hit 7 billion on Oct. 31 and continue to skyrocket for the rest of the century.

Our planet is in the midst of its sixth mass extinction. Hundreds of plant and animal species are disappearing from our planet every day, never to return. In fact, scientists say species today are going extinct 100 to 1,000 times faster than normal. They’re going extinct because of us — people.

Rather than do nothing, a national campaign to heighten awareness about the consequences of overpopulation on nature is being spearheaded by the Center for Biological Diversity.

Called 7 Billion and Counting, the campaign and its website strive to engage people with the issue by offering a variety of activities and interactive features on the site.

At the web site, people can find an interactive map showing which endangered species live in their states — and are threatened by the effects of overpopulation. Lessons on how to write “letters to the editor” in support of speaking out against overpopulation are available, as well as, free downloadable ringtones of the voices of many of the animals now on the endangered species list.

We’ve already witnessed the devastating effects of overpopulation on biodiversity: Species abundant in North America just two centuries ago — from the woodland bison of West Virginia and Arizona’s Merriam’s elk to the Rocky Mountain grasshopper and Puerto Rico’s Culebra parrot — have been wiped out by growing human numbers.

The Center for Biological Diversity is the world’s only environmental group working full-time to raise awareness about the link between booming human population growth and wildlife extinctions happening around the world.

Previous Post The Plight of the Miseducated: In Search of the Texan Latino Identity
Next PostQ&A Roundtable between President Obama and Hispanic Journalists

Google reminds Latinos to have pride in their roots, culture and accomplishments with online exhibit

The Plight of the Miseducated: In Search of the Texan Latino Identity
Comment
Q&A Roundtable between President Obama and Hispanic Journalists