After slew of tech victories, Mexico-based start-up turns its attention to American markets

In just 23 hours, three young Mexican techies developed a technology that could revolutionize the way retail stores and restaurants serve their customers.

During AngelHack Mexico City, a 24-hour hacking marathon that was held at Google Mexico back in June 2013, Alberto Garcia, Edgar Hernandez Vilchis and Abraham Cornejo designed Hostspot and earned the right to represent Mexico at the Global AngelHack Demonstration Day in San Francisco.

Hostspot, as Cornejo explains it, is a technology that would allow retail stores and restaurants to collect real-time, in-store analytics that Internet giants like Amazon and Google collect with every click to better understand their customers.

The software works by asking customers for a name and an email address when a customer initially attempts to connect to a store’s Wi-Fi through their smartphone, tablet or laptop. When a customer registers, Hostspot then anonymously measures things like how long a customer spent in a certain area of the store, how many times the customer has visited and any behavior that may help a business understand customer preferences.

Attending the demonstration day was not guaranteed, so the three quit their jobs and focused on raising $5,000 to be able to attend. It paid off, and they walked away not only as the winners of the global competition but also with a $25,000 investment.

Hostspot’s initial funds have since been spent a year and a half later. The trio has secured about 80 clients in Mexico and the U.S. and is currently gearing up for a pilot program to have Hostspot used in the stores of a popular clothing retailer in Mexico.

Cornejo, Hostspot’s chief marketing officer, relocated to Dallas in August 2014, where he hopes to introduce Hostspot to mainstream American retailers. Latina Lista caught up with Cornejo to talk about Hostspot and its future.

LatinaLista: Why did you decide to relocate to Dallas?
Cornejo: “A start-up accelerator called RevTech that is run by David Matthews heard about us and our product and he offered to bring us here. Also, Dallas is a hub for corporate representatives who work for companies that might really need this kind of technology.”

LatinaLista: How have you liked your time here so far?
Cornejo: “We’ve had a very good reception from Mexican entrepreneurs who have emigrated to the U.S. They’ve helped us a lot, and we have someone who is going to invest in the company.” 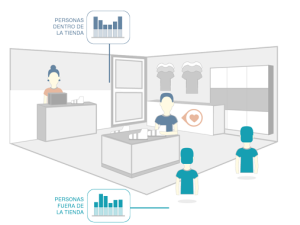 LatinaLista: How did you come up with this idea?
Cornejo: “At first, we just had a technology that detected cell phones in a certain area. We didn’t really know what to do with that. It was really a combination of our talents that led us to having an actual product. With my background in marketing, I understood that this kind of information is collected by online marketers. But it didn’t really become a service until we started offering it to potential clients and they told us what kind of analytics would help them.”

LatinaLista: What’s been the most difficult thing for you since you guys started working on Hostspot?
Cornejo: “It’s always the money. We ran out of money a little while ago from our U.S. account, so I’ve been covering my own expenses here. Other than that, the biggest challenge was turning our software from just a technology to an actual service that can be of use to someone. We worked with a lot of theories and testing before we decided to focus our efforts on selling Hostspot’s services to chain stores.”

LatinaLista: Have you received offers to sell Hostspot?
Cornejo: “We received an offer about six months ago, but we had to turn it down because it wasn’t good enough. I feel like if we got a better offer we still wouldn’t sell because we’re not there yet. We still have a long road to polish and perfect our product and grow our customer base.”

LatinaLista: How is Hostspot faring financially?
Cornejo: “We are revenue-positive, but we don’t have enough cash flow to pay ourselves. None of us come from affluent families, so we are taking a big financial risk. Right now, we’re working on raising $400,000, and we have almost $170,000 committed to us. We want to use these funds to increase our presence in the United States because this is where we see our biggest potential market.”

LatinaLista: Do you see Hostspot as a stand-alone product or is it something that will eventually be incorporated into another technology?
Cornejo: “That’s the really interesting part. We think we can be the secret sauce or the edge that certain products and companies have. If you sell routers, you might be interested in incorporating this and give your routers a leg up on the market. If you run a PR agency and you offer your clients a way to measure these in-store analytics, I think that also gives you an advantage over other agencies.”

LatinaLista: Anything else?
Cornejo: “We know we’re going to struggle, but we hope this will pay off. We put our hearts and all our efforts into this. We understand that we may fail because we are entrepreneurs and we’re competing in a global market, but we feel we have a product that has a solution for these ailing retail markets.”