Latina Lista: News from the Latinx perspective > Media > Transcripts > Transcript: Remarks by the President on Border Security and Immigration Reform

Transcript: Remarks by the President on Border Security and Immigration Reform 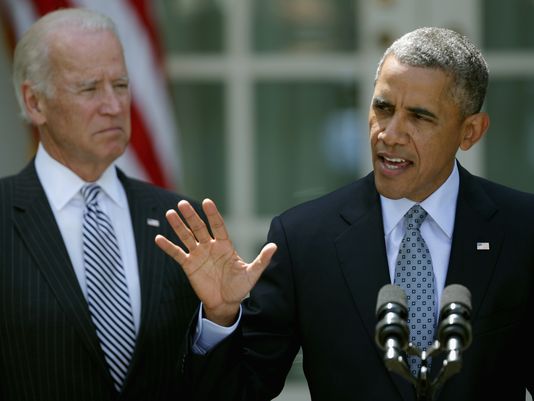 THE PRESIDENT: Good afternoon, everybody. One year ago this month, senators of both parties –- with support from the business, labor, law enforcement, faith communities –- came together to pass a commonsense immigration bill.

Independent experts said that bill would strengthen our borders, grow our economy, shrink our deficits. As we speak, there are enough Republicans and Democrats in the House to pass an immigration bill today. I would sign it into law today, and Washington would solve a problem in a bipartisan way.

But for more than a year, Republicans in the House of Representatives have refused to allow an up-or-down vote on that Senate bill or any legislation to fix our broken immigration system. And I held off on pressuring them for a long time to give Speaker Boehner the space he needed to get his fellow Republicans on board.

Meanwhile, here’s what a year of obstruction has meant. It has meant fewer resources to strengthen our borders. It’s meant more businesses free to game the system by hiring undocumented workers, which punishes businesses that play by the rules, and drives down wages for hardworking Americans. It’s meant lost talent when the best and brightest from around the world come to study here but are forced to leave and then compete against our businesses and our workers. It’s meant no chance for 11 million immigrants to come out of the shadows and earn their citizenship if they pay a penalty and pass a background check, pay their fair share of taxes, learn English, and go to the back of the line. It’s meant the heartbreak of separated families.

That’s what this obstruction has meant over the past year. That’s what the Senate bill would fix if the House allowed it to go to a vote.

Our country and our economy would be stronger today if House Republicans had allowed a simple yes-or-no vote on this bill or, for that matter, any bill. They’d be following the will of the majority of the American people who support reform. Instead, they’ve proven again and again that they’re unwilling to stand up to the tea party in order to do what’s best for the country. And the worst part about it is a bunch of them know better.

We now have an actual humanitarian crisis on the border that only underscores the need to drop the politics and fix our immigration system once and for all. In recent weeks, we’ve seen a surge of unaccompanied children arrive at the border, brought here and to other countries by smugglers and traffickers.

The journey is unbelievably dangerous for these kids. The children who are fortunate enough to survive it will be taken care of while they go through the legal process, but in most cases that process will lead to them being sent back home. I’ve sent a clear message to parents in these countries not to put their kids through this. I recently sent Vice President Biden to meet with Central American leaders and find ways to address the root causes of this crisis. Secretary Kerry will also be meeting with those leaders again tomorrow. With our international partners, we’re taking new steps to go after the dangerous smugglers who are putting thousands of children’s lives at risk.

Today, I sent a letter to congressional leaders asking that they work with me to address the urgent humanitarian challenge on the border, and support the immigration and Border Patrol agents who already apprehend and deport hundreds of thousands of undocumented immigrants every year. And understand, by the way, for the most part, this is not a situation where these children are slipping through. They’re being apprehended. But the problem is, is that our system is so broken, so unclear that folks don’t know what the rules are.

Now, understand –- there are a number of Republicans who have been willing to work with us to pass real, commonsense immigration reform, and I want to thank them for their efforts. There are a number of Republican leaders in the Senate who did excellent work and deserve our thanks. And less visibly, there have been folks in the House who have been trying to work to get this done. And quietly, because it doesn’t always help me to praise them, I’ve expressed to them how much I appreciate the efforts that they’ve made.

I believe Speaker Boehner when he says he wants to pass an immigration bill. I think he genuinely wants to get something done. But last week, he informed me that Republicans will continue to block a vote on immigration reform at least for the remainder of this year. Some in the House Republican Caucus are using the situation with unaccompanied children as their newest excuse to do nothing. Now, I want everybody to think about that. Their argument seems to be that because the system is broken, we shouldn’t make an effort to fix it. It makes no sense. It’s not on the level. It’s just politics, plain and simple.

Now, there are others in the Republican Caucus in the House who are arguing that they can’t act because they’re mad at me about using my executive authority too broadly. This also makes no sense. I don’t prefer taking administrative action. I’d rather see permanent fixes to the issue we face. Certainly that’s true on immigration. I’ve made that clear multiple times. I would love nothing more than bipartisan legislation to pass the House, the Senate, land on my desk so I can sign it. That’s true about immigration, that’s true about the minimum wage, it’s true about equal pay. There are a whole bunch of things where I would greatly prefer Congress actually do something. I take executive action only when we have a serious problem, a serious issue, and Congress chooses to do nothing. And in this situation, the failure of House Republicans to pass a darn bill is bad for our security, it’s bad for our economy, and it’s bad for our future.

So while I will continue to push House Republicans to drop the excuses and act –- and I hope their constituents will too -– America cannot wait forever for them to act. And that’s why, today, I’m beginning a new effort to fix as much of our immigration system as I can on my own, without Congress. As a first step, I’m directing the Secretary of Homeland Security and the Attorney General to move available and appropriate resources from our interior to the border. Protecting public safety and deporting dangerous criminals has been and will remain the top priority, but we are going to refocus our efforts where we can to make sure we do what it takes to keep our border secure.

I have also directed Secretary Johnson and Attorney General Holder to identify additional actions my administration can take on our own, within my existing legal authorities, to do what Congress refuses to do and fix as much of our immigration system as we can. If Congress will not do their job, at least we can do ours. I expect their recommendations before the end of summer and I intend to adopt those recommendations without further delay.

Of course, even with aggressive steps on my part, administrative action alone will not adequately address the problem. The reforms that will do the most to strengthen our businesses, our workers, and our entire economy will still require an act of Congress. And I repeat: These are reforms that already enjoy the wide support of the American people. It’s very rare where you get labor, business, evangelicals, law enforcement all agreeing on what needs to be done. And at some point, that should be enough. Normally, that is enough. The point of public service is to solve public problems. And those of us who have the privilege to serve have a responsibility to do everything in our power to keep Americans safe and to keep the doors of opportunity open.

And if we do, then one year from now, not only would our economy and our security be stronger, but maybe the best and the brightest from around the world who come study here would stay and create jobs here. Maybe companies that play by the rules will no longer be undercut by companies that don’t. Maybe more families who’ve been living here for years, whose children are often U.S. citizens, who are our neighbors and our friends, whose children are our kids’ friends and go to school with them, and play on ball teams with them, maybe those families would get to stay together. But much of this only happens if Americans continue to push Congress to get this done.

So I’ve told Speaker Boehner that even as I take those steps that I can within my existing legal authorities to make the immigration system work better, I’m going to continue to reach out to House Republicans in the hope that they deliver a more permanent solution with a comprehensive bill. Maybe it will be after the midterms, when they’re less worried about politics. Maybe it will be next year. Whenever it is, they will find me a willing partner. I have been consistent in saying that I am prepared to work with them even on a bill that I don’t consider perfect. And the Senate bill was a good example of the capacity to compromise and get this done. The only thing I can’t do is stand by and do nothing while waiting for them to get their act together.

And I want to repeat what I said earlier. If House Republicans are really concerned about me taking too many executive actions, the best solution to that is passing bills. Pass a bill; solve a problem. Don’t just say no on something that everybody agrees needs to be done. Because if we pass a bill, that will supplant whatever I’ve done administratively. We’ll have a structure there that works, and it will be permanent. And people can make plans and businesses can make plans based on the law. And there will be clarity both here inside this country and outside it.

Let me just close by saying Friday is the Fourth of July. It’s the day we celebrate our independence and all the things that make this country so great. And each year, Michelle and I host a few hundred servicemembers and wounded warriors and their families right here on the lawn for a barbecue and fireworks on the Mall.

And some of the servicemembers coming this year are unique because they signed up to serve, to sacrifice, potentially to give their lives for the security of this country even though they weren’t yet Americans. That’s how much they love this country. They were prepared to fight and die for an America they did not yet fully belong to. I think they’ve earned their stripes in more ways than one. And that’s why on Friday morning we’re going to naturalize them in a ceremony right here at the White House. This Independence Day will be their first day as American citizens.

One of the things we celebrate on Friday –- one of the things that make this country great –- is that we are a nation of immigrants. Our people come from every corner of the globe. That’s what makes us special. That’s what makes us unique. And throughout our history, we’ve come here in wave after wave from everywhere understanding that there was something about this place where the whole was greater than the sum of its parts; that all the different cultures and ideas and energy would come together and create something new.