Update: Release of dash-cam tape of unarmed TX immigrant shooting to be delayed 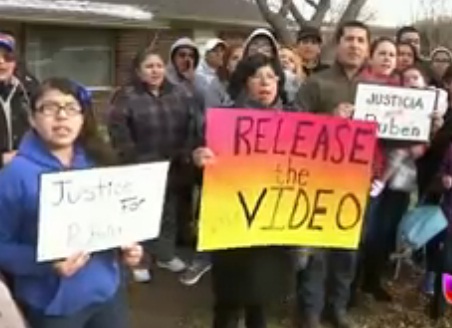 GRAPEVINE, TX — The Tarrant County district attorney has asked the Grapevine police department to hold off on releasing the dash-cam video from the night of Feb 20 when Ruben Garcia Villalpando was shot and killed by a Grapevine police officer.

The news comes after Villalpando’s family along with the support of civil rights activists packed the Tuesday night Grapevine city council meeting demanding the release of the video.

Francisco Garcia Villalpando, the brother of the deceased Villalpando, said he feels the delay is a tactic to calm down the community reaction to his brother’s death.

“They’re hiding something. If they’re not releasing it, it’s because they’re afraid of something,” Villalpando said.

Francisco Villalpando said he is one of the family members who has actually seen the video and he is confident that the video shows enough to bring charges to the officer.

The Grapevine police department said in a statement that the video was not being released as it was part of an ongoing investigation.

The Garcia family’s attorney, Domingo Garcia, released a statement on the family’s behalf:

“Misinformation and failure to release the tape show the clear intent to hide the REAL truth from the public. If a regular citizen had shot a unarmed person ,that person would be arrested and be in jail pending a grand jury determination.”