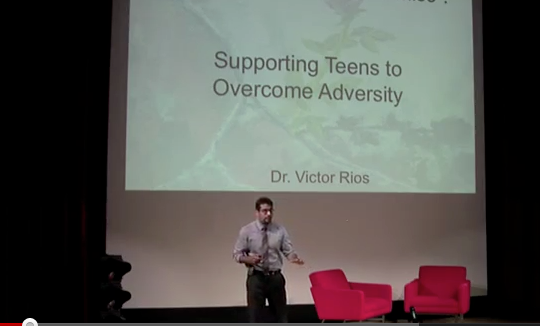 LatinaLista — Victor Rios never thought he would be a speaker at a TEDx conference. He never dreamed he would be a college professor or an author of a book either but the associate professor of sociology at UC Santa Barbara achieved all those things in spite of living a life labeled “at-risk.”

In his talk at the TEDxUCSB conference, Professor Rios explains how he went from being an impoverished child of a single mother to a gang member to a successful professor. Knowing that too many “at-risk” kids don’t make it like he did, he has devoted the last ten years to research on how to motivate young people that face adversity. Rios claims one way is to not consider these young people at-risk but as “at-promise.”

In January 2012, Professor Rios received a $300,000 grant from the William T. Grant Foundation for a study examining how the interactions between gang-associated youth and their parents, school professionals, police and probation officers affect their identity and criminal behavior. His 2011 book, Punished: Policing the Lives of Black and Latino Boys (NYU Press), analyzes how juvenile crime policies and criminalization affect the everyday lives of urban youth.

Professor Rios’ ongoing research is garnering him national attention, along with, some disturbing findings:

Professor Rios’ study of criminalization and racialization of inner-city youth during the 1990′s shows how “get-tough” legislation targets Black and Latino youth, and generates public support by playing on mainstream anxieties about race and crime. More importantly, Ríos shows how criminalization and punishment have become primary socializing institutions and sources of identity formation among delinquent boys.