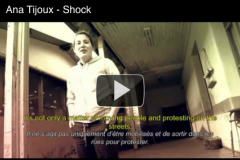 Last year’s massive student protests in Chile attracted world attention when students took to the streets causing work stoppages and the government to listen to the demands to provide equal access to a free education. One protester, Ana Tijoux, a young Chilean woman, took copious notes of her local revolution and began writing songs about the injustices she witnessed. What resulted was an album called La Bala. Its first single “Shock” is a political testimony to the massive student protests occurring in Chile and around the world. The album entered the Billboard charts at #2 on the Top Latino Rhythmic Albums sales chart and #40 on the Top Latin Albums sales chart.

Previous Post Napolitano: It is Unfortunate Families Are Being Separated
Next PostGuatemalan Government Launches Femicide Unit