Latina Lista: News from the Latinx perspective > Media > Videos > Intrn’l Video: Tracing the past, present and future of skateboarding in Puerto Rico

Intrn’l Video: Tracing the past, present and future of skateboarding in Puerto Rico 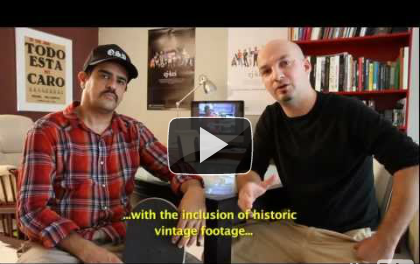 EJKEI may look like a strange word but it’s the phonetic pronunciation of the word “skate” used by Puerto Rican skateboarders. It also happens to be the title of the first documentary about the history of skateboarding in Puerto Rico.

The film’s producers and directors, Héctor Hugo Hernández and Javier Viqueira Keller, of Revolt films, wanted to create a film following the evolution of skateboarding on the island from the early 1970s to the present as seen through the eyes of the people who know best — Puerto Rican skateboarders.

According to the filmmakers, it’s the first time that so much historical footage and testimonies have been put together for a film about the island’s skateboarding culture. “EJKEI traces a past, a present and the future of this culture in Puerto Rico.”

No matter Supreme Court ruling on AZ SB1070, opponents hope it's first step towards immigration reform
1 Comment
The struggle for ethnic parity in U.S. media started with the American Revolution