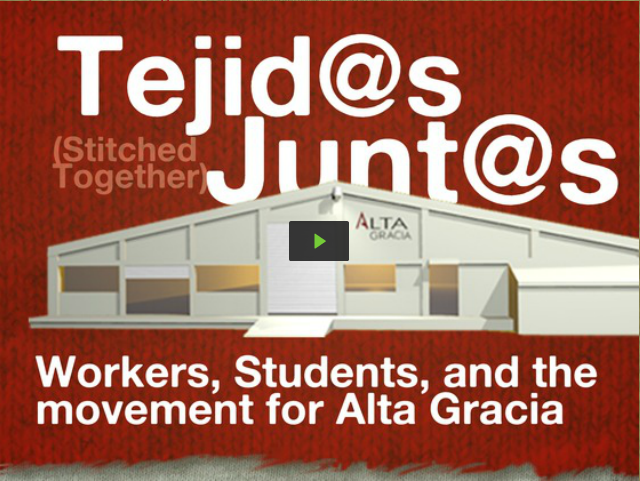 LatinaLista — Whether they’re called sweat shops or maquiladoras, the premise that products for the United States are made in other countries to take advantage of lower wages and worse working conditions, either physically or emotionally, or both, has long been a black eye to the United States’ support of workers’ rights.

Yet, there is one factory in the Dominican Republic that is challenging the traditional perception of foreign factories making products for the US. It’s called Alta Gracia and its emerging as an international symbol of the anti-sweatshop movement.

Alta Gracia is a new brand that opened up on the site of what was once a Nike and Reebok sweatshop. Today, it is the first-ever living-wage union-made factory producing college logo apparel — but it took a struggle uniting people from all walks of life to make it happen.

The story of Alta Gracia is that of a hard-won victory. The brick-and-mortar factory and many of the workers at Alta Gracia were once a part of another firm called BJ&B that produced clothing for Nike™ and other brands under appalling conditions. Workers fought a long battle to win a collective bargaining agreement with the factory owners at BJ&B only to be faced with mass layoffs and eventually a factory closure.

What happened next was amazing and if filmmakers of a new documentary about Alta Gracia have their way, it could serve as a model for transforming sweat shops across the world.

“Tejid@s Junt@s / Stitched Together: Workers, Students, and the Movement for Altagracia” chronicles the conversion of a sweat shop into a factory “where workers participate in a strong and independent union, receive a living wage of more than three times the local minimum wage, and are afforded dignity and respect on the job.”

The film uses interviews with worker/organizers who sew shirts at the Alta Gracia factory as well as footage from American students who stand in solidarity with Alta Gracia workers. This international relationship connects the struggle for fair treatment at the point of production to the right of consumers to know how and where their stuff is made.

The film is finished and is actually available, via password, to be seen in its entirety to distributors online. Yet, it still needs more finishing (post production) and printing of DVDs for further distribution to the public. To help raise the last bit of money needed for the film, its filmmakers have set up a Kickstarter campaign. The campaign ends July 12.

The filmmakers envision the film to be more than just a great movie. They see it as a teaching tool for other communities to use to organize their people in the quest for better working conditions and “bolster the global movement against sweatshop labor.”