Video: Latino playwright shares lessons in “Learn to be Latina” 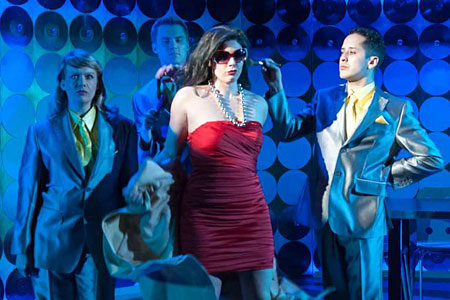 LatinaLista — Nowadays, even with all the anti-Latino immigrant sentiment going on, politicians, marketers and advertisers want Latino consumers and voters. So, it’s not a stretch to see why some business people see dollar signs when they think of the Latino market.

From real life, we know that people/businesses will do whatever it takes to tap into the lucrative Latino market. How many grocery stores have “Latino” food aisles now? So, when playwright Enrique Urueta wrote his play “Learn to be Latina” the premise is totally believable.

“Learn to be Latina,” winner of the national Great Gay Play Contest, is about Lebanese American singer, Hanan, whose record producers feel she is unmarketable and would have more success as a Latina singer! “Desperate for fame, Hanan surrenders her ethnic identity for Latin pop stardom.”

In the featured video, the director and star of the play, which was staged at Mixed Blood Theater, talk about the premise of the play, the audiences’ reactions and how a comedic take on a serious topic forces an issue that is bound to become more common as Latinos get progressively “cooler.”