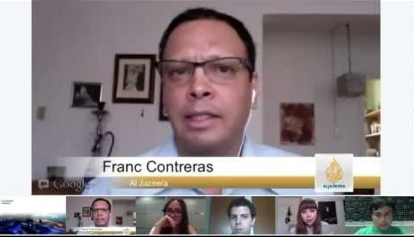 LatinaLista — All around the world young people have taken to the streets to lead in the demand for democratic justice from their political and community leaders. Most of these events have been happening oceans away from the United States. But a new movement in Mexico is not only bringing this kind of youth uprising closer to the U.S., but underscores the frustration felt by Mexican young people of the corruption that is engrained in their society.

Calling the movement #YoSoy132, it started with students in Mexico City demanding clear and open information in every media (newspaper, tv, radio, web) so there can be an informed vote in the upcoming presidential election.

Since the original demand, the movement has mushroomed into a nation-wide protest against corruption in the country’s politics and a bigger emphasis to pursue democracy. To fully understand what the movement is about, Al Jazeera’s English Mexico correspondent, Franc Contreras, held an online GOOGLE Hangout forum with some Mexican youth who explained their feelings about #YoSoy132 and why it marks a new political beginning for the country.

Guest Voz: Latino inmate sentenced as juvenile speaks out on Supreme Court's life without parole for youth
Comment
Latina Cubicle Confidential™ Are You Going to Declare Your Immigration Status At Work?