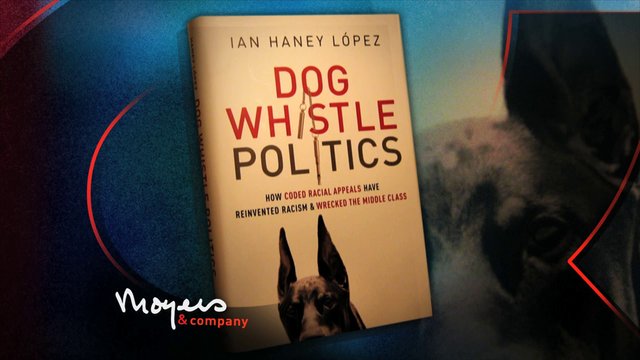 LatinaLista — Ian Haney López understands politics, especially dog whistle politics — the practice of using code words that use race to turn Americans against each other.

According to López, legal scholar and author of Dog Whistle Politics: How Coded Racial Appeals Have Reinvented Racism and Wrecked the Middle Class, politicians — on both sides of the aisle — are guilty of using racism as a political strategy to win votes. Their goal is to create intense racial animosity that the target voters will come out in droves and vote against a perceived threat.

It’s a troubling narrative which López explains to Bill Moyers in a fascinating two-part interview. Among López’s observations:

Most racists are good people. They’re not sick. They’re not ruled by anger or raw emotion or hatred. They are complicated people reared in complicated societies. They’re fully capable of generosity, of empathy, of real kindness. But because of the idea systems in which they’re reared, they’re also capable of dehumanizing others and occasionally of brutal violence. And that’s an important truth. Most people are not racists out of some sort of a sickness of the soul. They’re racist because of the society in which they operate.

The Republicans have a real stake in proving that government can’t work. They need voters to be hostile to federal government. To see government as the enemy. Because that’s the only way voters will support politics that actually give control of government back over to big money

Because dog whistling is going to evolve. And if it has to evolve in a way that brings in certain portions of the Latino population, certain portions of the Asian population, that’s what it’s likely to do. Unless we start addressing this within minority communities, but also in terms of national politics, we should expect these sorts of racial provocations to continue to define our politics for the next decade, two decades, three decades.