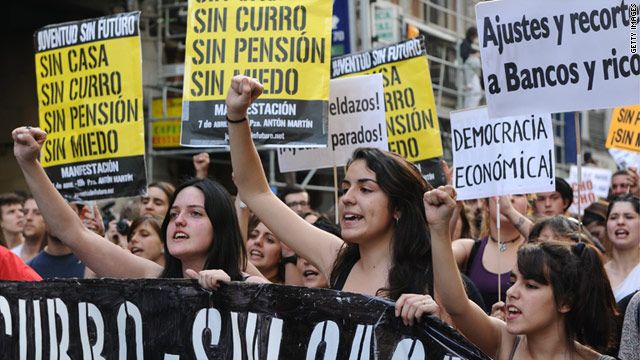 SPAIN — In a nation suffering its worst economic crisis in recent history, Spain’s youth is leaving a trail from the Iberian Peninsula to the United Kingdom, the Netherlands, Germany and even the United States, in search of work.

Spanish young professionals face a youth unemployment rate of 56.4 percent, which is leaving many of them with a hard choice to make: leave home — family and country — to find work; or stay home, literally, with no job and living with the parents.

Eva Maria Sanchez, 32, lives in La Garrovilla, a village in Extremadura, Spain. She spent two years without a job. She lives at home with her parents in order to save money.

Trained as a laboratory technician in the health field, Eva says that she usually sends out 4-5 resumes a day. But over the last two years, she’s only been called for three job interviews, each ending with no luck.

She is seriously thinking about moving abroad since she can’t make a living in Spain from her chosen career. However, in the short term, she is looking for other ways to make money, such as waitressing.

Carmen Gil, also 32, is from Madrid and is an actress. With a degree in advertising and public relations and experience in interpreting, Gil, who has been without steady income for three months, has diversified her resume with jobs ranging from selling books and clothes to acting.

She says that she is part of the generation best prepared in the history of Spain, but at the same time, her generation is naïve because too many things were handed to them for free.

“We are a country that doesn’t stop complaining long enough to take time to recognize our strengths,” Gil said. She adds she is looking forward to living on her own, becoming an actress and making a living from her earnings.

According to the Spanish Electoral Roll Abroad, known by the acronym CERA in Spanish, 400,000 Spaniards have left Spain since 2008. Yet, the number is believed to be much higher since there seems to be a steady flow of young Spaniards leaving the country and most do not immediately register at the Spanish consulates upon arriving at their new destinations.

The ease of traveling to other European countries and the free movement of workers enables this continuous mobilization. According to Eurostat, Spain has a 26.8 percent unemployment rate. Spain’s Ministry of Labor reports that overall there are nearly five million people unemployed.

Many decide to move to other countries with better prospects. South America has become a magnet for Spanish emigration. The common language allows for faster integration.

Peru, Chile and Brazil are emerging economies that have attracted Spaniards with growing opportunities.

Another popular destination is England, closer to home and only about two hours away by air. Daniel Jimenez, 29, has spent over two years living in London, for personal and professional reasons.

After this amount of time, he is fluent in English and works in a five-star hotel. However, his dream is to work as a university professor in Engineering Geodesy and Cartography.

“If Spain would return to being prosperous and having real prospects for economic growth, I would go home. But for now, I have no plans to return,” he said.

Isabel Cabeza, 28, studied tourism and has a Masters in rural development. She has been unemployed for five years. In all that time, she’s been on only two job interviews but found the working conditions at both places to be “appalling.”

Over the past two years, she has alternated between working temporary jobs and going back to school. She is thinking about working abroad, but with a company whose headquarters is located in Spain.

For the time being, she lives at home with her parents. With no mortgage and no boyfriend, she feels it doesn’t matter whether she stays in Spain or not.

The face of today’s Spanish emigrant has changed over the years. In the 1960s, Spaniards from the rural countryside, without university degrees, were the ones leaving their families and nation behind in search of a better life.

Today, the typical Spaniard packing it up is a 25-to-35-year-old, college-educated professional with degrees in such fields as: architecture, engineering, medicine, and biology, among others.

The extreme contraction of the Spanish labor market has created a worsening of working conditions, with sometimes meager salaries that barely exceed the minimum wage of €752.85 euros per month.

Not intimidated by borders or language differences, many Spanish emigrants choose to travel freely. Young and qualified, they find their natural places in these new countries working in jobs outside of their expertise.

Though seen as adventurous and risk takers, the young professionals who leave Spain to find a job would like nothing better than to stay near family and friends and pursue their careers — but, for now, it’s an impossible dream for many of them.

They are becoming their country’s lost generation — a generation forced to build new lives in a new country — and a new place to call home.

Fátima Martínez is a digital journalist and lecturer in journalism based in Madrid with expertise in social media research and blogging. Martínez serves as the crowdfunding coordinator for the Spanish digital magazine Frontera D. Leslie J. López is a freelance journalist based in Sevilla (Spain). Publisher of the online magazine InSevilla. López also freelances and his work has appeared in publications in Mexico, the United States, as well as, Spain.