Latina Lista: News from the Latinx perspective > Culture > Art > Video: With an elevator shaft as their canvass, the De La Torre brothers create a gateway into another realm

Video: With an elevator shaft as their canvass, the De La Torre brothers create a gateway into another realm 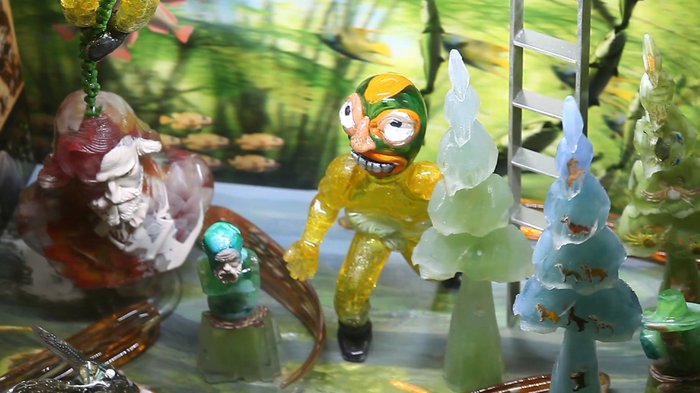 LatinaLista — Brothers Einar and Jamex de la Torre are artists who are known for taking their artistic vision to new heights. In their latest public installation, they not only do they take their work to new heights but to new depths too. Their canvass is the elevator shaft of the newly opened San Diego Central Library.

The Guadalajara-born brothers, glass artists by training, have transformed a boring ride in between floors into a journey of discovery with the glass elevator serving as the vehicle for exploring the two columns of dioramas that are the focus of the exhibit.

Titled Corpus Callosum, the four-part exhibit features oversized lenticular prints and stacked dioramas. Each diorama portrays a different scene and are separated between scenes of nature and technology. The title of the exhibit refers to that part of the brain that connects the left and right hemispheres, representing how viewers will make the connection between the two sets of dioramas.

Linking two things is a major theme in the work of Einar and Jamex de la Torre who are brothers. Maintaining citizenship and residences in both Mexico and the United States, they are inspired by two cultures, two lifestyles and the physical act of crossing the border back and forth. Exploring the differences between ideas, places and objects exposes rich conceptual, aesthetic and physical layers that the de la Torre brothers depict in their art. The brothers are, however, quick to point out that trying to make sense, visually, of so many layers is no easy feat. Arranging the colors, patterns and shapes of their artworks to achieve the right composition while clearly conveying the concept is both the challenge and the fun, they say. “We use objects as a vocabulary and try to create a visual flow that tells a story and doesn’t just exhaust the eye.”*

Each diorama strives to present a particular point in history but in a non-linear way, while tapping into symbols representing Mexican, Chicano and pop cultures. The use of such iconic figures in the dioramas is influenced by the artists’ Catholic upbringing, which they tell the interviewer in the featured video, is a way of telling a story with visual elements to reach even more people.

Above all, the brothers relish the idea of people discovering and rediscovering the messages found in their work and are doing their part promoting literacy of another kind.