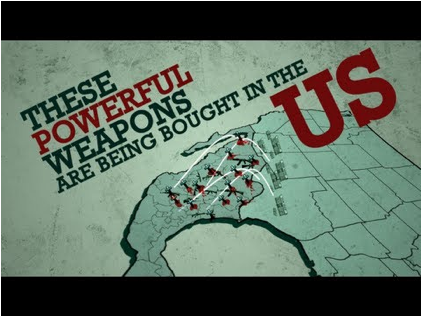 LatinaLista — Gun violence has been a consistent news headline for too long. Whether it’s Mexican cartel violence or the slaughter of innocent theatergoers or Sikh temple members, the easy availability of guns makes preventable loss of life all that more heartbreaking.

However, the deaths of Mexicans at the hands of gun-toting cartel members is especially grievous since guns are not legal for its citizens in Mexico. The gun trail has been traced directly back to the United States and its lax gun laws and greedy opportunists who act as the buyers for the cartels in exchange for some hefty profit.

Given the escalating violence in Mexico, several organizations banded together to create a campaign to compel President Obama to halt the flow of guns into Mexico. Stop Gun Smuggling into Mexico asks the President to:

Enforce the existing ban on the importation of military-style assault weapons (because many of them are later illegally smuggled into Mexico);

Require gun dealers to report to the Bureau of Alcohol, Tobacco, Firearms and Explosives (ATF) the sale of multiple assault rifles to the same person over a period of five days;

Strengthen legal enforcement in regions of the U.S. that supply the bulk of the contraband weapons smuggled into Mexico.

To strengthen the campaign, organizers are asking for people to sign the petition that will be sent to the White House along with the demands to end gun smuggling to Mexico.

Part of the campaign is a video created by Cuéntame, a social justice awareness site. In the video, the facts on how guns arrive in Mexico, their deadly impact and what people can do — sign the petition — is laid out in a captivating animated film that carries a serious message.