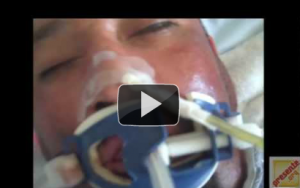 Anastacio Hernández-Rojas died entering the U.S. illegally from Mexico in 2010. But it wasn’t the high-risk journey into the U.S. that has historically taken so many lives of desperate immigrants that claimed Hernandez-Rojas as its victim that day two years ago. It wasn’t the journey, Mother Nature or cartel violence that killed Hernández-Rojas — it was the U.S. Border Patrol.

At the time, the New York Times reported that officers from the Border Patrol and Customs and Border Protection had struck Hernández-Rojas repeatedly with a baton and tasered him after he became combative when he was going to be walked to the border to re-enter Mexico. This man who had grown up in the United States from the age of 14 and was a father to five children born in the United States died as a result of the beating.

After Hernández-Rojas died, the San Diego police investigated his death but Border Patrol agents maintained that they didn’t use excessive force and were justified in handling the situation as they did because of Hernández-Rojas’ behavior. Yet, new footage of the beating uncovered by PBS and shown in a Frontline documentary that aired earlier this month showed a disturbing picture:

…there were 20 to 25 agents taking part in beating Hernandez Rojas and that he was laying on the ground when he was tased. In the new video footage, Hernandez Rojas’ cries for help can be heard and the agents can be seen surrounding him. It’s unclear whether he was handcuffed at the time.

The autopsy report by the San Diego County Medical Examiner found the death to be a homicide. Hernandez Rojas had a heart attack and the coroner said it was not clear how much the stun gun, a heart condition and/or his methamphetamine use were to blame.

Hernández-Rojas’ family has filed a civil lawsuit against the federal government seeking justice in the case. A petition to pressure the Border Patrol into releasing the names of the agents involved in the beating and whether or not they have been disciplined has been started on behalf of the family.

Also, advocates want to make the Border Patrol accountable for their actions. Since the year Anastasio was killed, Border Patrol agents have killed or seriously injured at least 9 people from San Diego to Texas.