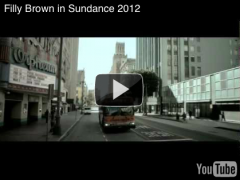 Filly Brown is about a young Latina musician on the verge of shooting to hip-hop stardom who finds herself having to choose between the people she loves and her dreams. The film debuts today (Jan. 20, 2012) in Park City, Utah, as part of the 2012 Sundance Film Festival. Edward James Olmos and familia produce, act and direct the film. Also, the film reunites Edward James Olmos with his Stand and Deliver co-star Lou Diamond Phillips.