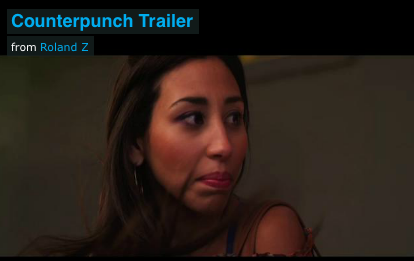 LatinaLista — Films that trace the journeys of underdog athletes in their rise to victory are standard Hollywood fare. Remember Rocky? Rudy? The odds that were always stacked against them could easily be overcome with sweat, dedication and good screenplay writing.

A new film, Counterpunch, due to be released this year, is another film about a young boxer in search of victory. But this time, the hero isn’t just looking for victory in the ring but victory over his mental disorder.

The film, based on a true story, is about:

Emilio Manrique (Alvaro Orlando), a young boxer, from the wrong side of the tracks with dreams of winning the Golden Gloves. An already difficult journey seems almost impossible when he’s diagnosed with bi-polar disorder and feels his world closing in around him. Trying to overcome seemingly endless obstacles and make something of himself, Emilio can’t escape his alcoholic mother and her boyfriend (Stephen Bauer), his degenerate friends and his powerful, debilitating affliction.

Fortunately, Emilio has a support system in place including his crisis counselor (Danny Trejo) and a surrogate father in the form of his Uncle Frank (Oscar Torre). Things seem to finally start to turn for him when he earns the confidence and love of a beautiful, young boxing promoter (Camila Banus) bent on getting Emilio his shot at the big time.