Latina Lista: News from the Latinx perspective > Life Issues > Civil Rights > Viernes Video: One son’s tribute to his mother’s legacy of taking a stand against a “Stolen Education”

Viernes Video: One son’s tribute to his mother’s legacy of taking a stand against a “Stolen Education” 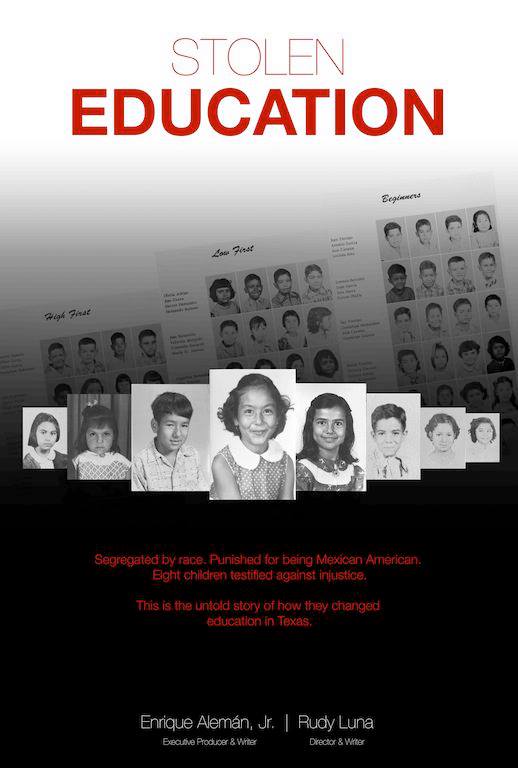 LatinaLista — The old saying — “history is written by the victors” — is never more true than when it comes to Latino U.S. history. Unless an egregious incident involving Latinos reached a U.S. court, chances are no one heard about it. Sometimes not even a victory in court was enough to warrant a historical footnote.

Such was the case in 1956. That was the year when eight Mexican American second-graders in South Texas challenged the Texas educational system for discriminating against them by making them attend three years of First Grade — beginner, low and high. The children and their families were told that this “ability grouping” was necessary because, as witnesses testified, “the Spanish “retardation of Latin children” would adversely impact the education of White children.”

It was a common practice back in Texas in 1956 and one that a newly formed Latino civil rights group called the GI Forum would champion in the case known as Hernandez et al. v. Driscoll Consolidated Independent School District (1957).

The personal stories of those children called to testify against their teachers, the Superintendent and the State of Texas was not something that was handed down as a source of pride within the Latino community. In fact, Enrique Alemán, whose own mother Lupe was the first of the children to take the witness stand, only heard of the story once while growing up. It wasn’t until his mother died of breast cancer in 2002 that Aleman started looking more deeply into what his mother and her classmates had endured and decided that more people needed to be made aware of this forgotten chapter of Latino civil rights.

His decision resulted in the making of the documentary Stolen Education.

Dr. Alemán, who today is the assistant vice president for Student Equity & Diversity; an associate professor of Educational Leadership & Policy and co-founder and co-director of the Adelante Partnership at the University of Utah, joined forces with director and writer Rudy Luna to produce a film that has been garnering enthusiastic and strong emotional receptions from its screenings in South Texas.

“I never learned about the story from her, then she died while I was in my PhD program,” Dr. Alemán said. “I started researching the case and always wanted to find out more what it was like. So, I decided to try and find as many of the students that were involved.

In tracking down the students to record their memories of that time, Dr. Alemán tells Latina Lista that he was impressed by who these children grew up to be.

“What struck me the most was that they overcame, struggled and made something of themselves,” Dr. Alemán said. “Even though they had to go through this, they kept their spirits up, had families, contributed to their communities and did well. They felt validated that someone would ask them and hear their story. Most of them finished high school, one went to college and they had productive lives. Part of the documentary talks about what came of them after going through this.”

The film proved to be much more to Dr.Alemán than just making sure this important part of Latino history wasn’t forgotten.

This project re-connected me to my mother in a way that I thought I could never do again after her passing. It’s an example of how our family histories – in many Texan families – can be lost from generation to generation.

For this small South Texas community, as well as for a broader national and Texas audience , it also opens up opportunities for discussion of complex, societal and historical events and provided spaces for remembrance and healing among multiple generations of both Mexican American and White persons. ~ Enrique Alemán

Currently, the film is being screened at universities and colleges with the hopes of submitting it to film festivals to get picked up for wider distribution.