Latina Lista: News from the Latinx perspective > Human Rights > After 9 years, Cuban dissident finally receives his Presidential Medal of Freedom only to do something unexpected

After 9 years, Cuban dissident finally receives his Presidential Medal of Freedom only to do something unexpected 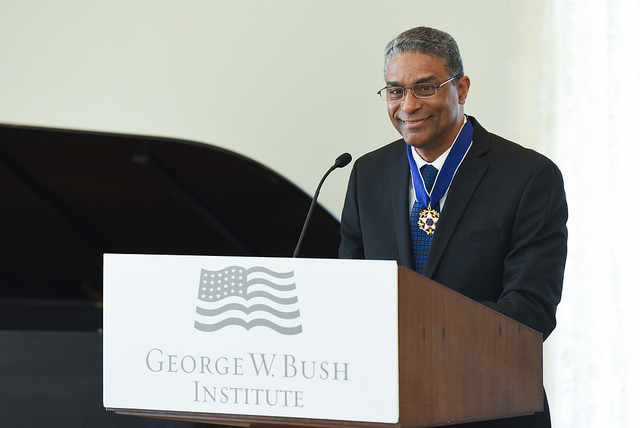 LatinaLista — Like medical doctors around the world, Cuban-born Dr. Oscar Elias Biscet took an ethical and professional oath when medically treating his patients. Yet, Dr. Biscet assumed one more responsibility towards his fellow Cubans — to work tirelessly for his country’sP democracy and freedom from Communism.

It was that personal oath that garnered Dr. Biscet a belated honor from former President George W. Bush.

Born July 20, 1961 in Havana, Cuba, Dr. Biscet began his medical practice on the island in 1987. It was an eye-opening experience for him. So much so, that he steadily found himself angered by what he saw communism doing to the people. He decided he had to do something.

In 1999, Dr. Biscet was arrested for “dishonoring national symbols,” “disorderly conduct,” and “inciting to delinquent conduct.” He spent three years in jail. A month after his release, he was arrested again as part of the Primavera Negra for “dangerous activities against the security of the state.” He was jailed for 25 years as a prisoner of conscience, sometimes subjected to total isolation.

Fortunately, Dr. Biscet’s suffering didn’t go unnoticed. Human rights advocates and religious organizations around the world sounded the alarm for his release, along with bestowing numerous awards on him in absentia. The United States was among them.

His activities with the Emilia Project only make him the target of continued harassment and surveillance by the Cuban government but it hasn’t stopped him from raising awareness abroad about Cuba’s oppressive policies and returning home to continue the fight, though the Cuban government has made it known that they would not mind if he left the country permanently.

But there’s no chance of that as Dr. Bicet recently shared with Former President George W. Bush when he traveled to Dallas, TX to the Bush Institute to finally receive the Presidential Medal of Freedom from President Bush.

“The Presidential Medal of Freedom that President Bush awarded me in 2007 was a great gift of dignity offered by the American people through their president…President Bush left a wonderful legacy for the people of Cuba.”

Though Dr. Biscet sees the medal as a gift for all the people of Cuba, he declined to take the medal home with him saying that he will not take it until his country is “free.”