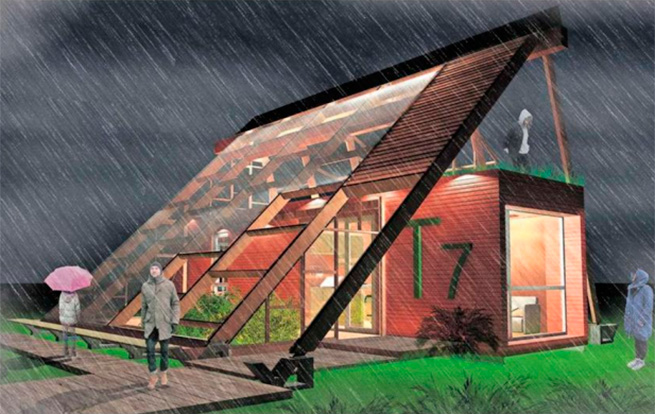 While the “solar village” is open to the public, visitors could only enter if they agreed to do one of three things: bring a recycled item, bicycle pedal on the “BiciWatt” to create energy for one of the generators or show the entrance ticket via downloading it to their smartphone, so as to reduce paper waste.

“For sustainability to exist it’s not just about creating a home, it’s necessary that there exists a community of people who contribute to this,” said Jose Torres, the leader of the team building the “Module Solar Footprint” house.

Chile has an international reputation for being known as one of the main centers of production of Non-Conventional Renewable Energy (NCRE). So, the public was not disappointed in touring each of the homes which offered something uniquely different. Whether it was the house designed especially for the city of Temuco, 800 km south of Santiago, which has the distinction of being the third most polluted city in Chile because people burn firewood for heating or the house dubbed “Catch-Rain, Catch-Sun” that was inspired by the traditional architecture of the region where steep sloped roofs collect rain while the roof’s structure lets in sunlight as a natural heat source, the competition strove to showcase the future of sustainable living in Chile.

“The solar life proposes one with sustainable mobility, environmental education, recycling, all so that we have a more sustainable city and society, and one that is friendlier to the environment, pointing towards a better quality of life,” the general coordinator of Build Solar, Mauricio Zanotti, told Efe. “Build Solar creates the opportunity to generate a new standard in the development of sustainable affordable housing for Chile and Latin America.”

The Solar Village is open from April 10-19 and the winning home will be chosen based on which team incorporated better use of renewable energy.