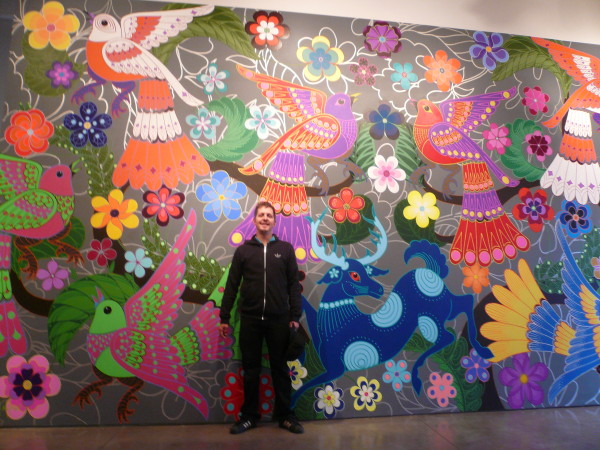 Ames Alley is an underused alley in the Mission District of SF. In an effort to transform Ames Alley into a more vibrant public space, locals are working with the Green Alleys Project and Luna Rienne Gallery to commission a mural from local artist Jet Martinez. Jet’s murals are vibrant explosions of color and often weave together flowers and animals. He’s been given artistic freedom to make his mark on the alley.

This new work will be adjacent to an existing mural by another San Francisco artist, Ursula Young. Ursula’s mural was the first to bring new life to the alley and attracts visitors to the alley on a regular basis.

Jet Martinez’s work is inspired by Mexican folk art, which, though stylized in a flat, graphic manner, creates vibrance with its use and application of color — static imagery celebrating life at its most ecstatic.

Martinez begins with a traditional rendering, then integrates his own visual language. A graduate of the San Francisco Art Institute, he is a prevalent and long-standing artist in the Mission and beyond, having been a director of the Clarion Alley Mural Project as well as exhibited in cities throughout the world.

The campaign is to help offset the costs of bringing Jet’s art to the community, with a goal of raising $3,000. Solar lighting has already been installed on the walls as part of a DIY Green Alleys Project, so both murals will be illuminated year-round. Also, anti-graffiti coating will be applied to protect the art.