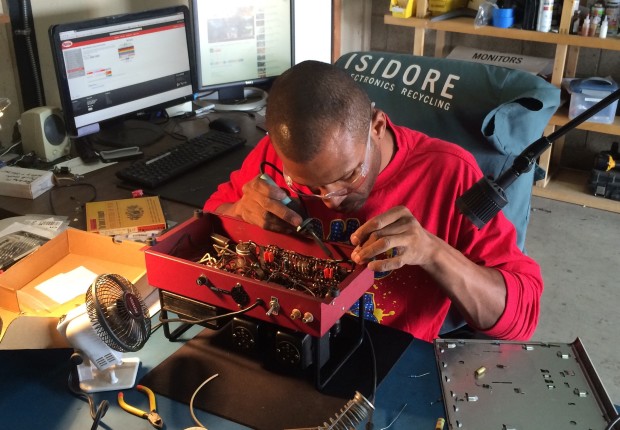 It's all over the news: the criminal justice system is broken. As a result, American correctional facilities are acting as social-service programs – providing healthcare, meals, and shelter for a whole class of people: poor people, people with mental illness, people with drug and alcohol addictions, and, at shockingly high rates, people of color; all at a cost of $80 billion a year.

They come back to our communities. And when they do, they so often face legalized discrimination (barred from housing, food stamps, and even certain neighborhoods) and can find it nearly impossible to make a legal living. And, so, people return to how they know to make money and, at rates of up to 70% in some areas, people return to prison.

But if they've done their time, why can't they be forgiven? And, at the very least, shouldn't society give them an opportunity to be employed again, to make a legal living, and to re-enter society?

That's exactly what Isidore has been doing since 2011. They are an electronics recycling company that is putting the people who have so often been discarded by society, back to work, recovering value from the things that society has discarded: e-waste.

Isidore believes in the power of forgiveness, the power of giving people opportunity, and the power of work. Once people have done their time and are job-ready, they are welcome at Isidore.

For the past 4 years, Isidore has been responsibly repairing, re-marketing and recycling unwanted electronics and destroying data. They've recycled over 1 million pounds of e-waste and employed over 25 people – keeping toxins out of landfills and creating jobs for people who have done their time and are ready to get back to work.

They think what they do is exciting, and sorely needed in our country — they're right!

But they want to do more.

They are raising $60k to buy a truck, a mobile hard drive shredder, and a generator to make it work. This way, they will be able to haul more e-waste, create more jobs, and be able to bring their data destruction services directly to their customer's property. Win, Win, Win.

But there's a catch: because they are such a new-fangled sort of company, traditional banks won't lend to them, "impact investors" want to see more growth before they will get involved, and foundations don't know what to do with them.

Right now, they rent their trucks, but are trying to buy their own and put a hard drive shredder on it so that they can accelerate their growth and create more jobs.

This is a model that should be replicated all around the country, and it starts with Isidore going big in L.A.

Your contributions will help us get the truck and transform it into a mobile data destruction machine.

employment, featured, incarcerated, social justice
Previous Post Guest Voz: Why Planned Parenthood is a lifesaver for Latinas
Next PostWhy only now – after 51 years – war is ending in Colombia

Guest Voz: Why Planned Parenthood is a lifesaver for Latinas
Comment
Why only now – after 51 years – war is ending in Colombia