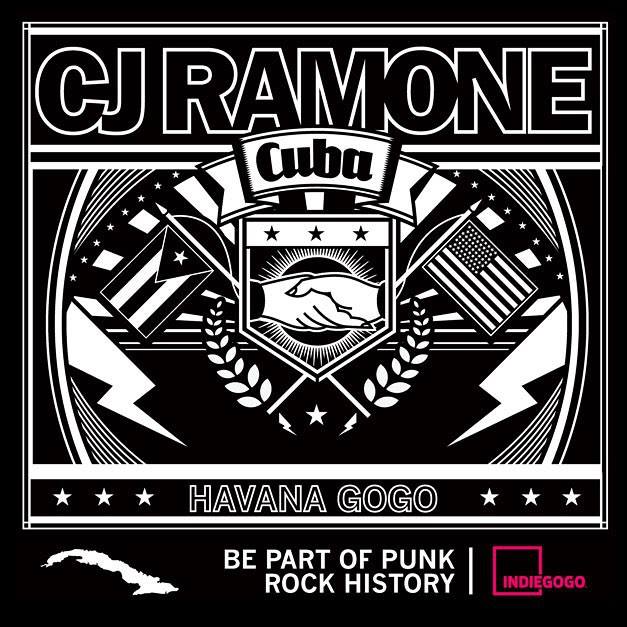 Cj Ramone of the world-famous Ramones played bass for the Ramones from 1989-1996, their most successful years. He took some years off after their retirement to recover, and then got back on the road.

He’s put out three solo records and has been touring the world flying the Ramones flag ever since.

CJ has been to a lot of places and seen a lot of things, but he recently was offered a real once-in-a-lifetime opportunity. He has been invited to go to Cuba to play the Habanarte Art and Music Festival in Havana on September 12 as well as another show on the 13th.

Cj will be the first American punk to play in Cuba.

As this is considered a “cultural exchange,” he will not be payed for the shows or the travel expenses. That’s the reason for the campaign.

Cj needs to raise $9,500 for flights, baggage overages for the gear for him and his band, camera rentals, and production expenses.

According to Cj, “This is your opportunity to be a part of Punkrock history by helping us to get there!!!”

The campaign is offering some perks which include getting donors’ names on the credits of the documentary that will be filmed of the trip, a one-of-a-kind Cj Ramone Cuba tour shirt, and the Fender Precision bass he will be playing on the tour which Cj will autograph!

Cuba, featured, music, punk
Previous Post Immigration lawyer, tireless fighter for the undocumented, now finds himself at mercy of the court — because he exposed an unlawful truth
Next PostA Delaware Hispanic Heroine

Immigration lawyer, tireless fighter for the undocumented, now finds himself at mercy of the court — because he exposed an unlawful truth
Comment
A Delaware Hispanic Heroine