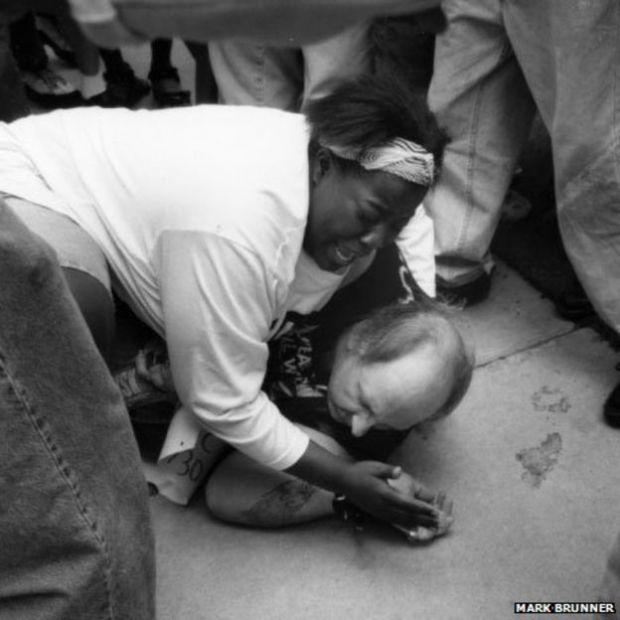 In 1996 Keshia Thomas was attending a protest against the Ku Klux Klan, a white male with an ‘SS tattoo’ and wearing a Confederate flag t-shirt found himself in the midst of the protesters. The man was knocked down and beaten, Keshia shielded the man and stopped the attack.

Photographs of her amazing act of bravery, refusing to meet hate with hate, have made their way around the world spreading inspiration and hope.

Keshia continues to be a voice for what is right. Her heart is to help give hope, equality, acceptance, respect, and tranquility to override disparity in the United States.

On August 1, 2015, Keshia embarked in the NAACP’s “America’s Journey for Justice” – a historic 860-mile march from Selma, Alabama, to Washington, D.C to lobby for change.

This journey will “mobilize activists and advance a focused national advocacy agenda that protects the right of every American to a fair criminal justice system, uncorrupted and unfettered access to the ballot box, sustainable jobs with a living wage, and equitable public education.”

The walk will end with a rally and advocacy day in Washington, D.C.

Compelled to participate, Keshia has made a great sacrifice by taking a leave of absence from her job. This sacrifice will cost her income, insurance and stability however, Keshia sees this all as a small sacrifice in relationship to the great injustices we all still see as American citizens in 2015.

Keshia walks as a demonstration of her heart and this journey is the new beginning of her endeavor to serve as an advocate, activist, and advisor on issues affecting humanity.

Issues like educating people in relationship to handling issues surrounding racial intimidation within schools and workplaces.

Racial intimidation within primary and secondary education is real, and takes place more often than people realize. When faced with a situation that requires the school staff to respond to racially fueled incidents, there is often a lack of knowledge on how to do so. Keshia plans to offer training on how to effectively handle situations between school staff and students. She will also be able to provide companies with training for those in management, on how to deal with racial intimidation between employee’s.

Born in Detroit, Michigan but raised in Ann Arbor, Keshia currently resides in Houston, Texas. With renewed excitement, Keshia is moving back to Detroit in order to be a part of another great renaissance for the city by launching her non-profit organization, P.O.I.N.T. (Purpose. Opportunity. Independence. New Thinking.)

P.O.I.N.T. is an initiative that brings affordable incubator space and resources to the city of Detroit. These resources will help cultivate the ideas of people into viable small businesses and will help them from the germination phase (idea,) to the vegetation phase (implementation) and finally onto harvesting (independence). These resources are aimed at those who see their dreams as impossible – those who have been afraid to dream as a result of their circumstances.

P.O.I.N.T. will offer them space for the business to thrive, access to resources to structure the business for success, and mentorship for guidance and growth. The purpose is to create jobs and work towards a self-sufficient economy in the city of Detroit.

Keshia’s vision is great but it can’t be fulfilled without support.

Keshia’s campaign goal is $10,000 and her hope is to bring a fresh voice to address the racially fueled events that have taken place, and to advocate for acceptance and unity.