Crowdfunder: Introducing the world to the new Cuba Libre! 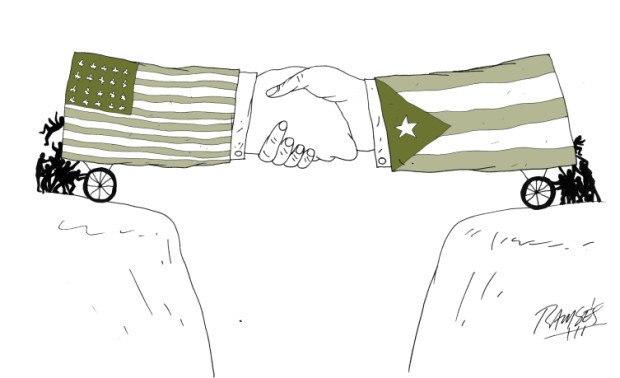 On September 19, 2015, Pope Francis lands at the José Martí International Airport in Havana, Cuba. He says:

“In the words of José Martí,

the process of normalizing the relations between people

is a sign of the victory of culture and encounter,

of dialogue and universal growth

over the system of dynasties and groups.”

Cuba's freedom hero, José Martí is also one of the great writers of Latin America. He lived 42 years (1853-1895), and his accomplishments are staggering. A journalist, a lawyer, a teacher, a poet, a writer of children’s stories and a political philosopher, José Martí united people of all backgrounds in the fight for Cuba’s independence as he stood for liberty, democracy and greatness of the human spirit.

The Cuban people have been torn apart by two ideologies. For Fidel Castro, Martí is a revolutionary hero whose writings emphasize freedom through education and social equality. For the right-wing Cuban-Americans in Florida, Martí is the hero whose name is given to anti-Castro broadcasters, Radio and TV Martí. The New Cuba Libre! will address the relevance of and possible changes to TV and Radio Martí, in the context of US-Cuba normalization.

The New Cuba Libre! will bring viewers into the lives of young Cubans who are shaping the Cuba Libre! of the 21st century.

This historical turning point in Cuba-US relations is an opportunity to bring together Cuban people, as did José Martí, and to accomplish the Cuba Libre! of the 21st century.

At this historic junction, the charismatic characters in The New Cuba Libre! – satirists, musicians, bloggers, Hip Hop artists, a courageous young black female human rights lawyer – will express how profoundly the values of sovereignty, solidarity and especially freedom are rooted in José Martí’s heritage. They will show how they intend to finally accomplish the Cuba Libre! envisioned by José Martí.

The Canadian film crew has collectively over 30 years of experience. The script is written and features a cast of interesting characters, each with a personal tie to Cuba.

Some of the film's characters

NESTOR is an exceptionally talented, classically trained musician who has played Jazz saxophone with other great artists like Osdalgia, ‘the daughter of the Buena Vista Social Club’. He has composed richly textured music for the sound track of The New Cuba Libre!

Nestor has been living in Montreal, and early in 2016 his return to visit Cuba will be filmed where viewers will witness some very emotional reunions and a deluge of questions.

DR. LILLIAN GUERRA is a Professor of Cuban and Caribbean History at the University of Florida. She has written several books about Cuba, including "The Myth of José Martí".

With all her flair, Lillian will shed light on who is José Martí, the complex man and the icon, and on how his image has been used by opposing sides of the Cuban question. According to Lillian, “remembering a Martí who stood for development is now the means for recovering a social unity based on a consensus for change.”

RAMSES MORALES' wit and sensitivity as a cartoonist have earned him an international reputation. Ramses is a larger-than-life character who contains within him two strong cultural heritages: Cuban and Jewish. “In Cuba, we are the David, in a David and Goliath story. Now, we demand respect from Goliath who must meet us as equals. We Cubans must not lose our core values: free health care, free education, security in the streets.” Ramses adds, “What will never change, regardless of what the future holds for Cuba, is Martí's relevance and importance. He will always be ingrained in the hearts, minds and souls of the Cuban people.”

Drawings in the form of a flipbook animated by Ramses, will introduce certain transitions in the film.

VERÓ is a young mother and  blogger who does not have Internet at home. “For me, writing a blog is an opportunity to say what I believe can be improved in Cuba. If we look deeply at Cuban history, we perceive the slow awakening of civil consciousness. There are reasons to be hopeful in Cuba." For Veró, one of the reasons to be hopeful is the work that Laritza Diversent does to help common Cubans defend themselves.

In a context where disinformation and demonizing are rampant in the media, the film will present strong film characters, interviews that will be thought-provoking, scenes that will be lively and artistic expression compelling. The main character, Nestor, a young Cuban saxophone player and composer, will take us with him on his return to Cuba after two years of living in Montreal. Emotions will be high, discussions will be intense, and the music will flow.