Crowdfunder: Marine researchers tackle a whodunit in the mysterious deaths of Sei whales in Chilean Patagonia 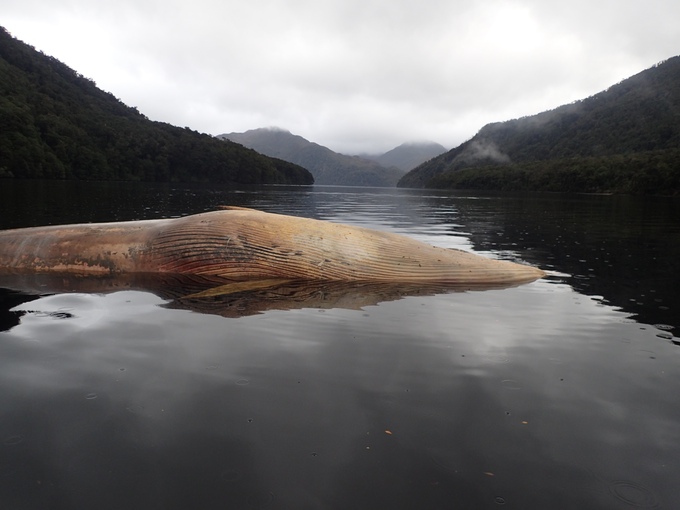 In 2015, while on expedition in Golfo de Penas, Chilean Patagonia, a team of biologists discovered what would become known as the largest mass mortality of whales in recorded history. This past January 2016, Katie McConnell was part of a crew of oceanographers, paleontologists, veterinarians, biologists and sailors who returned to uncover clues to how the whales died, and why.

Climate change, or changes to the Earth´s climate system, is predicted to cause stronger and more frequent El Niño events. In Chilean Patagonia, one effect of El Niño is warmer sea surface water, which has been tied to more frequent algae blooms. Some types of algae blooms, also known as red tide (marea roja) events, can occasionally contain certain types of phytoplankton, which can produce a variety of toxins.

These toxins build up in the tissues of filter feeding creatures, like krill, squat lobster and mussels. Although these organisms may live unaffected by the algae, the whales, sea lions and fish that eat them can be become very sick, and even die.

That year, the discovery of the mysterious death of 337 Sei whales on the beaches of Golfo de Penas, Chilean Patagonia, captured the concern of the world. Now, after an expedition to revisit the whales and search for red tide as their cause of death, scientists are shifting focus to investigate 1) how the decomposition of dead whales benefits terrestrial and marine life by providing an abundant source of nutrients to the environment and 2) how Orcas may be attacking and killing Sei whales in the region.

Sei whales are the third largest whale on the planet (behind blue and fin whales) and they are an endangered species. They are known to live rather solitary, oceanic lives, rarely coming close to shore. Sei whales are also the fastest whales in the world, and have been clocked at 50 km/hr. Because they spend much of their time at sea, filtering small fish and crabs through their baleen to eat, little is known about how Sei whales live.

Imagine how mystified the scientists must have been to discover hundreds of dead Sei whales on beaches deep inside the labyrinth of fjords and canals of Golfo de Penas! How did they get there? Why? Were they sick?

The most surprising discovery of the expedition, however, was when researchers observed a pod of Orcas attacking a Sei whale. A group of about 5-6 Orcas, including at least one juvenile, herded a large Sei whale into a narrow sound and tried to block its escape. As the Sei whale fled from its attackers, the Orcas rushed along side the Sei, slapping the water with their tails and bodies and pushing the whale with their noses.

At one point, the Sei whale beached itself, coming fully out of the water, as the Orcas churned in the shallows behind it. However, in the blink of an eye, the Sei whale was able to shimmy back into the water and make a break for the mouth of the sound. Unfortunately for the Sei whale, it was met by a second pod of orcas who joined the hunting party and chased the Sei out of sight.

The next morning, there was a new Sei whale dead on the beach, and one more at a beach nearby.

This rare, unique and shocking event left scientists with many new questions.

After being unable to find red tide toxins in nearly 25 field tests of phytoplankton and mussels, could it really be that orcas are herding and killing all the Sei whales? Why is this happening now? Are there more whales in the region? Where did they come from? Why? Were the Sei whales sick from a red tide event which made them easy targets?

Although researchers may never know exactly what factor or combination of factors may have caused the death of hundreds of Sei whales in such a short amount of time, they now have a once-in-a-lifetime opportunity to study the life that flourishes after their death, and the chance to capture more evidence of one of the few known cases of Orcas cooperatively attacking baleen whales.

Though the campaign’s goal of $2,000 has already been surpassed, the extra money will be used to acquire more cameras to help document and understand one of the biggest mysteries happening in this region of the world.

For the latest updates on the research into the deaths of Sei whales in Golfo de Penas, scientists have created a web site.