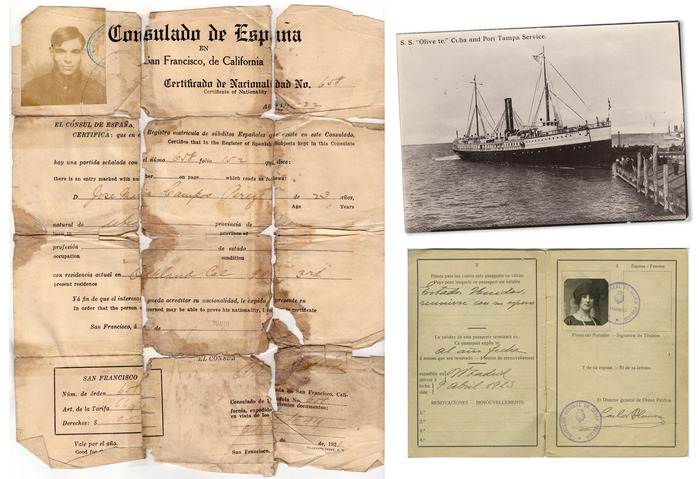 When people think about Spaniards in the Americas, they think mainly of the handfuls of conquerors, friars, explorers and settlers who crossed the Atlantic during the heyday of the Spanish Empire. But actually, many more Spaniards -roughly 4 million- came to the Americas in the late nineteenth and early twentieth century than in the four centuries following Columbus’s first voyage.

And of those millions, tens of thousands ending up settling in “el Norte,”, which is how they referred to the United States. Here they formed vibrant, dynamic and compact communities all over the country. These communities would be forged and galvanized by the hardships of emigration, the deprivations of the Great Depression, and, finally, the catastrophe of the Spanish Civil War.

The surviving children of Spanish immigrants are at least in their eighties. Fortunately, many have preserved with loving care the photographs and documents that make up their parents’ archives.

Since 2010, they have put their forces together to create the largest documentary archive on this historical and cultural phenomenon. Two years ago, they created WhiteStoneRidge Productions, to conduct field work all around the United States and Spain, in an attempt to put together the pieces of the puzzle of the Spanish diaspora.

This field work has produced a good number of interviews, documentary films, photographic expositions, lectures, and encounters, all of which are aimed at preserving and divulging the history of Spanish immigrants in the United States.

Their goal is to create a book of photos to reconstruct in a new format the legacy saved in the family albums of the emigrants that they have met.

Virtually all the photographs in the book have been shared with them by families or individuals who for years have saved them as authentic private treasures.

Many of the owners of these images have said that they worry about the fate of their family archives, since, in many cases, the grandchildren and great-grandchildren of the immigrants are not very interested in what is now a distant past.

Armed only with scanners and cameras, for the last few years the men have been traveling all around Spain and the US, with the hope of saving these images from their fate of solitary confinement in basements or attics.

In this book, they present a selection of some of the best images they’ve managed to rescue, as a way of preserving and transmitting the history of Spanish immigrants, while at the same time honoring them.