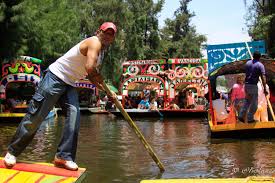 Xochimilco was designated a UNESCO world heritage site in 1987 to recognize these gems. Sadly, UNAM scientists proved in 2014 that the canals are contaminated with pesticides and other organics, threatening the chinampas and one of the world’s most endangered Mexican Walking Fish (axolotl) populations.

Atrazine is used in Mexico to control unwanted vegetation in corn and wheat fields, but is banned in many parts of the world because of its adverse effects on human health.

A passive sampler for these chemicals was developed in 2012, but it is only now that it is used to study Xochimilco’s pollution problem.

It is extremely important to study atrazine pollution in Xochimilco’s canals so the region can preserve the riches that made it a UNESCO world heritage site, and included on the List of Wetlands of International Importance.

If atrazine and other chemicals continue to pollute Xochimilco, unique endemic species like the axolotl will die out, people’s drinking water will be at risk, and it is possible the famed chinampas could deteriorate. These tragedies have already started, but the damage can be reversed by remediating the water.

To do this, scientists will implement a robust analytical method to map the concentration of atrazine and its metabolic products in Xochimilco’s soil and water. This knowledge will then be used to solve Xochimilco’s pollution problems.